This week two new diet drugs jumped into the news media. The first, Orlistat (Alli), is just now on the drugstore shelves, and the second, Rimonabant (Zimulti), is going through the FDA approval process. Will they prove to be PPH diet drugs like Fen-phen?

It's been 10 years since Fen-phen was withdrawn from the market because too many people taking it developed a fatal valvular cardiac illness, PPH (primary pulmonary hypertension)--but Fen-phen still lingers in our collective memory. Never mind whether the new drugs actually work—will they be safe to take? 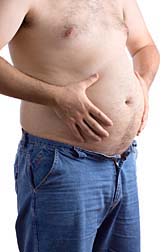 Alli, made by GlaxoSmithKline, is the first FDA-approved, over-the-counter diet pill. It works by preventing the digestion of about 25% of the fat intake from each meal, by attaching itself to enzymes in the digestive tract. It's a lower dose of the prescription drug pill Xenocal. (Glaxo is the drug company that makes the diabetes drug Avandia, which has recently been linked with higher rates of heart failure). And yes, Alli could cause those little bowel "accidents".

The second diet drug, Rimonabant (which would be prescribed under the name Zimulti, from Sanofi-Aventis) was the subject of an FDA advisory committee meeting this week to help the FDA decide whether this "experimental" diet drug for the obese should be approved for sale in the U.S. That decision is expected by the end of July.

The advisory committee unanimously gave Zimulti the thumbs down on June 13, citing worrisome side effects and insufficient knowledge about it. The FDA is not bound by the opinion of the advisory committee but normally gives it great weight in the decision-making process.

Zimulti is already being sold in Europe. It works by lowering the appetite. The experts say that it blocks parts of the endocannabinoid system, the system which stimulates appetite and promotes fat storage. Encocannabinoids are inter-cellular "lipid messengers" made within the human body, and have the same molecular structures as those found in cannabis (marijuana). Zimulti, a synthetic cannabinoid, works by turning down "the munchies" caused by these little messengers.

The down side to Zimulti is that it has potential adverse side effects including depression and anxiety. In Europe the drug is not recommended for patients on antidepressants, or those with uncontrolled major depression. Other potential side effects include nausea, vomiting, diarrhea, dizziness and insomnia.

Sanofi-Aventis says that in clinical trials, people who took 20 milligrams of Rimonabant a day, while sticking to their diet, lost an average of 14 pounds in 3 to 6 months, compared to 3.5 pounds for the control group taking a placebo. On the good side, those taking Rimonabant experienced greater improvements in HDL (the "good" cholesterol) triglycerides (blood fats) and insulin sensitivity than would be expected from weight loss alone.

But theoretically, patients would have to stay on both of these drugs indefinitely, as the efficacy of the drugs does not live on after they are stopped.

The experts say that the overall weight loss to be expected from taking Zimulti and dieting would be about 7% of body weight. Glaxo says that if you take Alli and diet, you can lose 50% more weight than by dieting along—i.e. 15 pounds, for example, instead of just 10 pounds. In a trial it was found that the dieting group taking Alli lost 5% of their body weight over 4 months, compared to a 2.5% loss for the control group.

More News
In the glory days of Fen-phen, it was touted as being more successful than diet and exercise, and with fewer side effects. Eventually it was learned that 30 percent of the patients using the drug had developed heart problems. An unknown number of patients developed PPH (primary pulmonary hypertension), and people who took Fen-phen ten years ago are STILL developing the illness. These new victims are just now seeking out legal help.

Wyeth, successor to the company which made the drug, has paid out billions of dollars to the victims Fen-phen left in its wake. Since new cases of PPH are still coming to light, the lawsuits are not over. There is no known cure for PPH, although surgery and other treatments can extend life expectancies for those who have developed the illness.

In the meantime, new diet drugs will continue to offer hope to the millions of overweight people trying to pry off some of that stubborn excess baggage. It looks as if Zimulti won't get FDA approval, at least this time, but maybe Alli will prove to be of help to dieters.

Don't throw out those size 10 pants just yet.....We will keep close tabs on both these drugs.