Attorney Ross Feldmann says hunters occasionally need to be reminded about safety, and the $380,557 personal injury verdict he obtained for his client will do just that. "People forget the rules of safety in the ambition to get animal," says Feldmann. "Whether it's a turkey or a deer, this case is reminds people of the consequences." 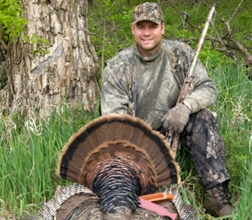 Two years ago Feldmann's client, William Rea, and another man were hunting in Vermont. They'd just bagged a turkey and were bent over checking their kill. Suddenly, there was a shotgun blast from behind them. Rea took the biggest hit. Fifty-two shotgun pellets struck his body and collapsed one of his lungs.

This was not the first time Gravel and Shea litigated a personal injury case on behalf of a hunter. "The big challenge in this case was to get through to the defendant or the insurance company, we don't know which, what the real risks were going forward," says Feldmann.

Feldmann's client sustained serious injuries, underwent surgery twice and lost time at work. The medical bills alone added up to $60,000. The $25,000 the defendant offered to settle the case was inadequate, as Feldmann and his client saw it, and the case went to trial.

Although the defendant's homeowner's insurance policy covered part of the award, it had a limit and wouldn't pay the entire $380,577.

More PERSONAL INJURY News
According to the International Hunting Education Association's (IHEA) most recent statistics there were 239 hunting accidents in 2007. A good number of those were self-inflicted wounds but most involved other victims.

Feldmann says hunting accidents frequently happen after a long day when people are tired and anxious. "These accidents happen when you get yourself in situations where it is towards the end of the day and you really want to get something. You cut corners, and that is what happened here.

"And yes, if you're a hunter, you'd be wise to check your homeowner's insurance policy," he adds.

Ross Feldmann is an associate attorney with Gravel and Shea. Feldman is a graduate of the Cornell Law School. His practice areas include personal injury, employment law, intellectual property, criminal law and product liability.