"The Branches Were Big as Trees"

A jury in Hunterdon Country, New Jersey recently awarded Kenneth Matlock and his wife a record-breaking $6 million for severe and permanent personal injuries suffered when rotten tree branches fell on their car as they travelled along Route 29. "This was the highest verdict in this courthouse in the country's 200-year history. The previous record was $2 million several years ago," says the Matlocks' attorney, John Dodig. 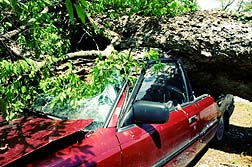 Kenneth Matlock was traveling along a road in Delaware Township with his wife and daughter and her young friend when two decayed branches suddenly gave way and crushed the car severely, breaking Matlock's neck. "These two branches were huge," says Dodig. "They overhung both lanes of route 29," says Dodig. "Testimony described those trees as obvious, massive limbs sticking out like a sore thumb."

Matlock, a truck driver, was 41 years old when the accident happened three years ago. He is no longer able to work.

However, with the help of several surgeries he has managed to recover some motion of his head. "His major injury was to his right dominant arm, which we think he used to limit the blow when the limbs crushed the roof of the car," says Dodig. "But he has basically lost the use of the arm. His hand is left in a permanent claw position."

Had the New Jersey Department of Transportation (NJDOT) followed its own guidelines regarding dangerous roadway conditions, the accident might never have happened, says Dodig. "[NJDOT] was required by their own inspection policy to identify hazardous trees and other hazardous roadway conditions. One of things they were required to look for was dangerous trees with limbs that would eventually break because of their weight."

More PERSONAL INJURY News
According to testimony at the trial, the limbs fell from as high as 60 feet in the air.

"It was our position that the New Jersey Department of Transportation, in their weekly inspections, should have seen these limbs thousands of times in the 10, 15, 20 years that these limbs were present," says Dodig.

"All they had to do was trim these back, and the accident never would have happened."