You know how some people just seem smart—well that's how attorney David Mazie seems. Smart! At age 46 Mazie has won millions and millions of dollars on behalf of clients lucky enough to get his firm to take on their case. His most recent win is an eye popping $2.1 million settlement recovered for a 47-year old man rendered legally blind because of a Lasik eye surgery procedure. "The settlement is large because the malpractice was clear," says Mazie, "and the damage was significant and it significantly impacted Mr. Dell'Ermo's life." 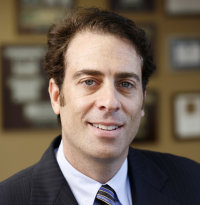 Lasik surgery alters the shape of the cornea to eliminate the need to wear glasses. The surgery was pioneered in Bogota, Columbia in the 1950s and over the last two decades, the introduction of laser technology has made it a commonplace and popular choice for tens of thousands of people.

James Dell'Ermo was an executive with a security services business. His vision was good, but at age 47, he needed glasses for distance. To correct his vision he chose a well-known eye doctor in New Jersey. Dr. Joesph Dello Russo has been something of a celebrity on the east coast as attorney David Mazie describes him. Della Russo once performed Lasik surgery live on "Good Morning America" and spent thousands of dollars every year promoting his eye clinic.

"Dell'Ermo's vision is now worse than 20/400. Even with corrective lenses, he has only 20/50 vision," says Mazie. "And because of the shape of eye, the contacts he wears pop out several times a day."

The firm used a world-renowned expert on preoperative testing procedures who gave testimony that, given Dell'Ermo's steep corneas, it made him unsuitable for Lasik surgery—something that a Lasik surgeon should have recognized.

Dr. Joesph Dello Russo makes no admission of guilt in the $2.1 million settlement and it was done only for expediency's sake, according to his counsel. However, it stands as the largest Lasik surgery settlement in the history of New Jersey and perhaps in the US.

Mazie has settled several other Lasik surgery malpractice lawsuits against Dr. Della Russo and has a couple still pending.

His firm, Mazie, Slater, Katz & Freeman has a reputation for taking on cases that are large and difficult. Sometimes Mazie and the other lawyers at the firm take on cases that other lawyers turn down. "We like to take on interesting, cutting edge cases that we consider challenging and out of the box," says Mazie.

More Personal Injury News
In 2005, Mazie sued the alcohol concession stand at Giant Stadium on behalf of a 7-year-old girl paralyzed in an accident with a drunk driver who had been drinking at a football game. The original verdict was an astounding $135 million. The amount was latter reduced and a confidential settlement was reached—but the original verdict stands as the largest ever award for a personal injury case in New Jersey and the largest ever alcohol liability verdict in the US.

Other lawyers had turned the case away, but not Mazie. "If it is a case where we think we can help someone who has been really wronged, and it makes sense for us, then we'll do it," says Mazie.

He makes it all sound so simple. It is simple for a smart lawyer like Mazie.

David Mazie did his undergraduate degree at Rutgers and earned his law degree from George Washington University. He is a senior partner at Mazie, Slater, Katz & Freeman. He was voted the top New Jersey trial attorney three years in a row. He is also a Certified Civil Trial Attorney, a status held by only two percent of New Jersey attorneys.

ANYWAYS-IF YOU THINK YOU CAN HELP ME PLEASE CALL ME

This article is almost three years old. Needless to say, the pending cases are no longer pending. Our writer has followed up with Attorney Mazie, who informed us that he settled maybe five cases against Dr. Russo regarding Lasik surgery issues, and at present has no further pending cases.

Posted by
William Scholar
on July 30, 2011
"Mazie has settled several other Lasik surgery malpractice lawsuits against Dr. Della Russo and has a couple still pending."

Please pull down any reference to Dr. Dello Russo or provide information to my email address as to what are the "couple" of law suits pending.