Identity Thieves Can Hit the Jackpot with Digital Copiers

Most Americans are aware of online security and load their computer systems with anti-virus/anti-spyware. But most aren't aware that digital copier hard drives are loaded with information and are a veritable gold mine for identity thieves. 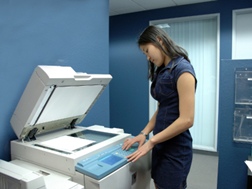 Gone are the days when photocopiers used mechanical devices to reproduce a document. Nearly every copier built since 2002 contains a hard drive that stores every image you scan, copy, and email. Many individuals and corporations lease copiers; identity thieves don't even have to do a break and entry. They can lift valuable information about you from an internet café while the seat is still warm. Or they can simply buy used copiers for just a few hundred bucks each, CBS News reports.

A few months ago a CBS crew and John Juntunen of Digital Software Security bought some used copiers from a warehouse in New Jersey. What they lifted from some of the hard drives is scary, to say the least, as well as an embarrassment for the Buffalo, New York Police Sex Crimes Division, the Buffalo Police Narcotics Unit, a New York construction company, and Affinity Health Plan. The latter is potentially a federal breach of privacy law: CBS found 300 pages of individual medical records, including drug prescriptions, blood test results, and even a cancer diagnosis.

CBS also found domestic violence complaints, a list of wanted sex offenders, and a list of targets in a major drug raid.

Representative Ed "Biz" Markey, a congressman from Massachusetts, asked the Federal Trade Commission (FTC) to investigate the potential danger of digital copiers. He wrote the following letter to the FTC:


Thousands of Americans make copies of sensitive information every day, completely unaware that the data is stored on a copy machine hard drive and then often never cleared when the machine is resold or disposed of. Just as you wouldn't leave a paper copy of your bank statement sitting on top of the office copy machine, a digital copy should not remain inside of it.

More IDENTITY THEFT News
I urge the FTC to immediately investigate this matter and encourage the Commission to pursue measures to provide consumers with additional information about the privacy risks associated with the use of digital copiers for copying sensitive information and the steps consumers can take to reduce these risks. Companies and government agencies also should be responsible stewards of personal information, ensuring that any personal information is wiped clean before the copier moves on to the next user.

Thinking about the information you have copied could make your head spin: tax returns including your social insurance number, employer identification numbers, confidential information for your attorney's eyes only…

The CBS story also pointed out that document-laden copiers were being shipped from New Jersey to Argentina and Singapore. Identity thieves could really hit the jackpot prowling the capitol—likely a number of used digital copiers contain very sensitive and top-secret information.

If you have suffered losses in this case, please send your complaint to a lawyer who will review your possible [Identity Theft Lawsuit] at no cost or obligation.
Request Legal Help Now

Posted by
Shaza Ahmed
on March 25, 2017
I want to get help for T. Mobil making on me feuds as have other account Under my name busied that releas porsonl information about me without my const which make me victim the person have many credit card under my nam he never pay it that harm my credit it I can't rent and I become l Homeles and he work under my name never pay taxes