Suspect of Identity Theft in Washington Could Have More Than 1,000 Victims

An Olympia, Washington man who was recently arrested may have planned the identity theft of 1,000 people, according to Thurston County Sheriff John Snaza. 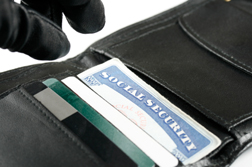 Anthony Vaughn is reportedly being held at Thurston County Jail on 50 counts of identity theft. One veteran detective said that the man was probably part of the largest identity theft ring in the history of the county, according to NWCN.com.

More IDENTITY THEFT News
Court documents indicate that Vaughn admitted to detectives that he performed the criminal acts in order to support his drug habit. According to the news provider, detectives lifted 40 boxes of evidence from the man's home in Olympia.

Police said that Vaughn possessed the names and social security numbers of a significant number of employees at the state's Employment Security Division. The names were reportedly listed on papers that were stolen from a car parked outside of the State Capitol last year, the news source said.

"Now, maybe we can give some of the people who have filed complaints and been a victim some relief we caught that person," said Sheriff Snaza.

According to the Federal Trade Commission, victims of identity theft are encouraged to close all of their accounts that they believe may have been tampered with.

If you or a loved one have suffered losses in this case, please click the link below and your complaint will be sent to a criminal law lawyer who may evaluate your Identity Theft claim at no cost or obligation.
Request Legal Help Now

Posted by
Tommy Mans
on January 28, 2015
Mine has been happening for a long time. I just recently located information after requesting records from the State of Washington (January 2015) and it reads as if I earned money out of state way back in 2003 and 2004. I have been dealing with my mail being redirected a long time and I was named in a class action lawsuit with Aetna with two other medical companies. I have had my AA degree mailed to someone else and also my enhanced license didnt arrive and neither did my payroll reciept. That was in 2008. I have also had both sons had their mail redirected as well. I dont know what or where to turn and I need to fix it. I have reported this to the USPS often but I do think a person who doesnt like me has relatives who work with USPS and with an insurance company as well. I will not put any names into the email for fear of the litigious nature of the group involved. I feel very attacked by all of this happening for so long.