A rather complex Pennsylvania Donning and Doffing lawsuit ended the year in 2016 with a partial victory for three Pennsylvania plaintiffs who took issue with their employer for attempting to offset off-the-clock work with payments for lunch breaks. 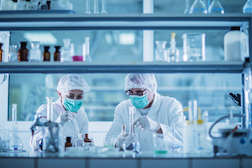 The defendants in the putative class action are EI DuPont de Nemours & Co. (DuPont) and Adecco USA Inc. The three plaintiffs originally launched their Pennsylvania unpaid wages lawsuit in 2012, seeking overtime pay for time spent donning, and doffing various pieces of employer-mandated gear prior to the start, and upon the conclusion of 12-hour shifts at the DuPont manufacturing facility located in Towanda, PA.

DuPont came back with a defense that because it voluntarily provided workers with paid meal breaks, the employer could apply those paid breaks to offset the unpaid donning and doffing time.

A judge in US District Court in 2014 originally sided with the employer and dismissed the Pennsylvania Employment lawsuit, on grounds whereby the unpaid work time (donning and doffing of gear) was not exceeded by the paid non-work time (paid meal breaks).

The plaintiffs appealed that ruling – and in their appeal benefitted from the support of an influential ally in the US Department of Labor. The Court, in fact, invited the DOL to file an amicus brief and weigh in on the issue.

The updated argument of the plaintiffs and the DOL in their appeal involved a potential violation of the Fair Labor Standards Act (FLSA), suggesting that FLSA tenets require that time for paid meal breaks must be paid at the regular rate if those meal breaks are duly provided and compensated, regardless of whether, or not there is any obligation to provide payment for meal breaks.

Under FLSA rules and various state-based guidelines, employers are obligated to provide employees with an uninterrupted meal break of at least 30 minutes. During this time, no work is to be performed and the employee is not to be on call or made available for any reason. The break is provided for nourishment and is the employee’s own time. Provided all aspects of the guidelines are met, employers are not required to pay employees for their meal breaks.

DuPont, on its own volition, had decided to pay employees for their meal breaks. However, plaintiffs alleged that DuPont attempted to use the paid meal breaks as a pass card, if you will, for avoiding payment of overtime for donning and doffing, and off-the-clock work.

The plaintiffs and the DOL, in their appeal argued the defendants can’t have it both ways. “There is no reason to distinguish between compensation for productive work time and compensation for bona fide meal breaks that the parties treat as hours worked,” the DOL said in court documents.

In response, DuPont sought a stay on the ruling for three months in order to give the defendant an opportunity to file a petition to the US Supreme Court for a review.

The Third Circuit, however, in early December of last year refused the petition to stay, thus upholding the appellate panel’s remand order back to the trial court.

A full appeal to the US Supreme Court remained a possibility.

The three plaintiffs in the putative class action are Bobbi-Jo Smiley, Amber Blow and Kelsey Turner. The case is Smiley v. EI DuPont de Nemours & Co, Case No. 14-4583, in the US Court of Appeals for the Third Circuit.