An overtime pay lawsuit in California that seeks class action status was filed just before Christmas by a plaintiff who alleges his employer stiffed him on wages as well as tips. 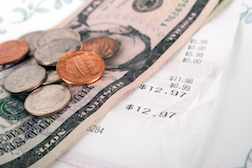 California law dictates that tipped employees are to receive tips collected on their behalf no later than the next regular payday. A lump-sum at the end of the year is against the law, noted Mana Barari, a senior staff attorney with the wage protection program at the Legal Aid Society, which is representing Martinez in the dispute.

Martinez speaks little English. His wife attended the interview with The San Francisco Chronicle to interpret for him. “I was counting on the tips – that would have helped me put gas in my car, get something to eat daily and for daily necessities,” Martinez said in Spanish. “When I paid my rent, I was very, very limited after that.”

Martinez also asserts in his unpaid overtime lawsuit that hourly workers were paid regular hourly wages – with no provision for overtime pay – regardless of the number of hours worked in any given work day, or work week. Overtime pay laws afford strict guidance on when an hourly employee is to receive overtime. Working off the clock, either before or after a shift, or missed meal periods and rest breaks can all be translated into unpaid overtime according to the tenets of California overtime law.

“We hope this case raises awareness around how tips should be handled and paid, both for the many low-wage workers in the service industry who rely on them, but also for customers who assume their tips will end up in the right hands,” Barari said.

Martinez, who worked as a prep cook at a Gordo Taqueria for a period of two years, filed his unpaid overtime class action December 26 at Alameda County Superior Court. Case information was not available.

More CALIFORNIA OVERTIME News
Earlier in the month, in an unrelated unpaid overtime case, a class action lawsuit against Costco Wholesale Corp. was settled when the defendant agreed to a $2 million settlement. Class members were comprised of current or former fleet drivers who alleged, through lead plaintiff Douglas Thompson that Costco failed to pay their drivers overtime wages, as well as meal break and other wages.

Thompson urged the judge in the case, US District Judge Cathy Ann Bencivengo, to approve the settlement, which will see some 882 proposed class members awarded just under $1,500 each. Drivers were, or are employed with Costco business centers or depots in the Golden State.

The case is Douglas Thompson et al. v. Costco Wholesale Corp., Case No. 14-cv-2778, in the US District Court for the Southern District of California.