The latest efforts by Wal-Mart Stores to block unpaid overtime class-actions by workers in Missouri and New Mexico were rejected June 12 by the appeals courts in both those states. The decisions have left Wal-Mart, the world's largest corporate retailer, "disappointed", according to a company spokesman.

But in New York, the decision went the other way. The New York State Supreme Court, the state's highest level trial court, turned down the workers in their request to sue Wal-Mart for wage claims by way of a class action. The class of plaintiffs would have included all Wal-Mart employees in NY State since 1996. 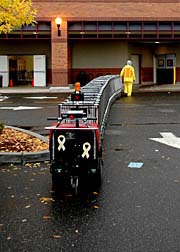 The New York court said the class was too broad, and the claims too individual. It ruled that each worker must bring his or her own lawsuit against the giant retailer. The employees' lawyers have said the judgment will be appealed.

The Missouri workers allege that Wal-Mart's policies and practices resulted in chronic under-staffing, so that employees were almost certain to have to work extra unpaid hours.

The Wal-Mart employees in both New Mexico and Missouri had obtained class action status in 2005. Wal-Mart's appeals of both these class action certifications have delayed the workers by an extra two years. If it now appeals the new rulings by the appeals courts, further costly delays will result.

The plaintiffs' lawyers in Missouri estimate that about 200,000 current and former Wal-Mart employees in the state would be covered in the class action. The Missouri workers allege that Wal-Mart forced them to work without pay after clocking out, as well as during meal and rest breaks.

Wal-Mart has been tied up in several states in class action lawsuits by its employees who say they are owed money for unpaid work.


Wal-Mart is now facing more than 70 labor related lawsuits across the U.S. The difficulty facing the Wal-Mart employees is that the labor laws are state laws, and these laws vary a little or a lot from state to state. So a judgment in one state may not act as much of a precedent to follow in another state.

If you feel that you are owed overtime pay, please contact a lawyer involoved in [Overtime Lawsuits] who will review your case at no cost or obligation.
Request Legal Help Now