Did Ortho Evra Patch Cause DVT?

Karen had blood tests--on her doctor's advice--before she went on the Ortho Evra Patch. Everything was fine until two years later, on a flight back to Canada from a back-packing trip around Europe. Her leg went numb and swelled up to double its size. "I was in the middle seat and it was agony," she says.

"It was a tingling sensation, like when your leg is asleep but it went on for the entire flight," says Karen (not her real name pending a lawsuit). That was July 31st, 2007. Karen barely walked off the plane. "By August 3rd my leg was killing me. 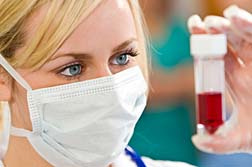 ""I went to the local walk-in clinic but the doctor told me to go to emergency immediately. They did an ultrasound but didn't find anything and told me to come back five days later. I told them I had recently flown so they made note of that. The doctors also told me to get rid of the patch.

I had another ultrasound and it detected DVT (deep vein thrombosis) in my right calf. The doctor gave me oxycontin. I thought it was weird that they didn't do anything except tell me to keep my leg elevated and go back to my family doctor. Which I did. By August 14th I went for another ultrasound and it had moved up to my knee. They injected me with fragmin—a blood thinner. I was so stressed out I got a migraine in the hospital.

I waited in emergency for eight hours before I got the first ultrasound. The second time, they called on my cell phone to give me the results and told me not to move anywhere. By that time I had gone outside to check my messages—that was nine hours later. By that time the clot could have moved anywhere!

When I got home I had to keep my leg elevated and a nurse came over every day for a week and gave me a shot in the stomach. I had to take a month off work. Luckily I had accumulated enough sick days. And I experienced withdrawal from the oxycontin, I didn't even take the whole scrip. I'm the kind of girl who won't even take a Tylenol; this stuff was so strong.

I kept going back to my doctor for blood and urine tests, at least once a week. After that she asked me if I had any questions: rather than ask questions I actually fainted in her office and she caught me going down but I still hit my head on the steel examining bed...

I had to take blood thinners for another three months and she said if I got another blood clot I would have to stay on them for life.

I told me mum and she was freaking out; she is a nurse. The next day my mum flew in from Saskatchewan because she was so worried. She knows how serious DVT can be. She insisted on going to the doctor with me; she deserves a medal for driving in the big city. This time we had a complete question and answer period with my mum at the helm.

Now I realized how dangerous the patch really is. My mum didn't know I was on the patch—she still thought it was from the flight. She was concerned because she told me a clot can move up and lodge in your lung, heart or head. My mum couldn't understand why I wasn't getting better health care.

More ORTHO EVRA PATCH News
I had to increase my apo-warfarin from 6mg to 7mg, based on my blood tests. That got me worried as well. Because I was on blood thinners, I could easily bruise and if I cut myself, I could bleed to death. I am a border service officer and it is my job to go through people's belongings, making sure they aren't bringing contraband—that could include knives and other sharp objects—across the border. And I am lifting heavy bags so this really stressed me out. When I got back to work I requested to work in the booth. And there were incidents at work when my blood pressure went so high that I had to be driven home.

When I was given the scrip for the patch I don't recall getting any information about side effects such as blood clots. And because I had the blood tests beforehand, there weren't any concerns. The blood clot caused three months of physical concerns and my psychological concerns are ongoing. If I take another long flight, I have to get another shot of blood thinners—my doctor consulted a cardiologist. This problem might stay with me forever.

A lot of women have problems with the patch. We have to write to our government agencies—I wrote to Health Canada and they recorded my complaint. That is one way we can make sure this drug is taken off the market."