Chastity has been through hell and back, all because she wore the Ortho Evra Patch. She had no idea how dangerous this method of birth control was until her doctor said she almost died due to a huge blood clot caused by too much estrogen from the patch.

Chastity was on the patch for more than two years. She was never warned of its serious side effects, including blood clots, stroke, heart attack and death. 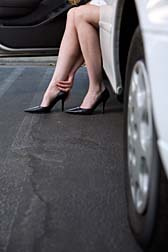 "I started getting cramps in my leg," says Chastity. I just ignored them but the following night I couldn't even walk so I packed up my two girls (ages seven and ten) and drove to the hospital. I just thought it was a charley horse and wanted to get some pain meds. But when I got to ER they measured my leg because it was swollen. Then they took a blood test and said my blood was too thick.

One of the first questions the ER doctors asked was if I was on birth control. When I told them that I was on the patch, they looked at each other. 'What's the matter?" I asked. 'There have been some legal actions taken about the patch and you should stop taking birth control—period,' the doctor replied. He told me to come back the next morning and get a Doppler ultrasound of my leg so they could see all the veins and how my blood was circulating.

When I went back on Saturday for the Doppler I brought the whole family. I still had no idea what was going on. We waited for a few hours to get the results. Coincidentally, while we were waiting for the test results and watching TV, we saw an ad from a lawyer that warned about the Ortho Evra Patch! It said that, if you have suffered from blood clots, stroke or heart attack, contact a lawyer.'

I was freaking out by that time.

They told me I had a blood clot in the back of my leg and said that I had to stay in hospital for three days but I didn't go for that. I went back home and was treated as an outpatient. I had to stay in bed; I couldn't move and had to take a few weeks off work.

I went online and called a lawyer. Then I talked to my husband and got him an appointment for a vasectomy.

I was put on Coumadin, a blood thinner, and had to go back to the hospital twice a day—luckily it is only six blocks away. I had to take my 12 year-old son with me; he had to wheel me in and out of the hospital because I wasn't able to walk. I was given an injection of another blood thinner in my stomach each visit, twice a day for two weeks.

They finally got my blood thinned enough so I could go back to work. Fortunately I have a desk job but I had to wear flat orthopedic shoes--not my favorite attire. No more heels for me and that was a major downfall; I was very depressed over the shoes. If you see my closet, you'd understand why," says Chastity, laughing...

But her illness was no laughing matter. Even back at work, Chastity had to go back to the hospital daily to have her blood checked. "I had it bad," she says.

"When my doctor told me the blood clot in the back of my knee was very large and it could travel to my heart or lungs and potentially kill me (if I waited a few more days that would have likely happened) I just looked at her—aghast. It still didn't click because I didn't feel sick. I didn't believe her!

On one of the visits back to the hospital they determined that I had been given me too much Coumadin. I had to stay in the house and do nothing, not even the dishes, until my blood thickened. If I so much as grazed myself, I would have bled to death.

It took me a while, but that's when I broke down. I pushed myself too far and wouldn't face the fact that I was seriously ill. I'm one of those super-achiever type A's and won't listen to anyone. It has gotten me into trouble in the past and almost did me in this time…

I was on Coumadin until a few months ago. The doctor told me that the clot will never completely go away but this blood thinner has caused a little hole in the clot to allow the blood to pass through. I can feel the clot and I can see the veins where they broke in the back of my leg. Every now and then when I am sleeping my leg goes numb and wakes me—I have to sleep on my left side all the time.

I'm scared about the future. I certainly don't want to go through this again. They said it is more than likely to recur but I don't know when; I just have to keep an eye on it. I'm only 34 and way too young to have an illness such as this.

More ORTHO EVRA News
I want to say this to Johnson & Johnson, the makers of the Ortho Evra Patch: there are young women on birth control and some of them can't remember to take the pill daily so the easiest way—what I thought—was the patch. Little do they know, they are hurting themselves day by day. There are stubborn people out there like me who won't listen right away but I advise anyone who is reading this to please take off that patch.

I would like to see Johnson & Johnson at least cover my hospital and medical bills because I had to file bankruptcy. I had some medical insurance but it wasn't enough. We didn't lose our house but just about everything else, including our sense of worth. I tried to hide everything and be strong for my family when I went through this. My kids heard the doctor say I could have died…"