Although Johnson & Johnson has paid at least $68.7 million in out-of-court settlements for lawsuits filed after females used its Ortho Evra birth-control Patch, is that enough? The healthcare maker says more than 5 million women have used the Patch but it doesn't say how many (countless) women have suffered blood clots, heart attacks or strokes. Or even death. 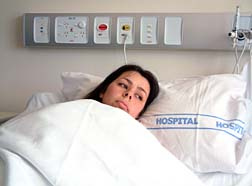 Bloomberg News reported that Johnson & Johnson settled one suit for $1.25 million filed by a 14-year-old girl who suffered two blood clots in her lungs after using the patch for several weeks. )The news agency says details of that settlement were made public after it received a copy of settlement documents from a court clerk.) And more lawsuits are coming...

So far, more than 4,000 lawsuits filed against Johnson & Johnson include documents and emails showing that even before the FDA approved the Patch in 2001, the company's own researchers found that the birth control device delivered far more estrogen each day than low-dose birth control pills. But the FDA did not warn the public about the risks until November 2005—six years after the study showed high releases of estrogen. Finally, the label was changed and prescriptions fell by 80 percent, but the warnings came too late for thousands of women.

Back in March 2003, LawyersandSettlements received a complaint from a young woman who suffered a blood clot a year previously—she had worn the Ortho Evra Patch for just two months. "My doctor told me that I could never use the Patch or even an oral contraceptive again because so much estrogen from the Patch causes blood clots," Diana said.

Before she was rushed to hospital, Diana suspected the Patch was causing her leg to swell and hurt; "I carefully re-read the information that came with the patches to see if that might be causing my symptoms," she said. "Had the literature been more informative, the Patch would have been removed when the problem began. Instead, I wore it for another week and a half thus causing the problems to become worse."

In 2004, Susan from Delaware wrote in: "I was hospitalized for 4 days with sub-massive blood clots in both lungs, I missed 3 weeks of work, endured a lot of pain, and I am on blood thinners for 6 months." Susan was lucky; some women didn't make it. James, from Clinton, Missouri said his 18-year-old daughter died on June 21, 2004, "resulting from a blood clot while using the Ortho Evra Patch".

2005
One year later, Doreen was out of work for 3 months because Ortho-Evra "caused me to get 7 blood clots in my left lung, and one in my right lung," she said. "I was in the hospital for a week, and now have numerous medical bills I cannot afford." Around the same time, Erica
started developing pains in her leg. She called the Ortho Evra help line and asked if there were any known symptoms such as the pains she was experiencing. "The nurse said NO and I should see my doctor," says Erica, "but I didn't have insurance at that time and thought, if the Ortho Evra nurse didn't think anything of it why should I?" Eric wound up with a blood clot and spent 8 days in hospital. "Driving long distances has been a chore so I wasn't able to go back to work. I am not able to play with my 9-month-old son or stand for extended periods of time. This has also hurt our family financially and I don't know how we are going to be able to afford my health care."

2006
Tonya was out of work for two months in 2006 after she was released from hospital. A blood clot traveled from her leg to her lung and she is still paying medical expenses. Akillah developed "lumps that could be felt through my skin in the pelvic region--my doctor told me to discontinue Ortho Evra," she said.

A third victim, just three weeks after wearing the Patch, Wendy said she developed a blood clot in her lower left leg and by the time it was found, the doctors also found residue of a clot in one lung. "I spent 24 hours in the hospital, had to give myself blood thinner injections for a week and coumadin for six months," she said. "In addition to all of this, because of my reaction to the Patch, I am no longer a candidate for any kind of hormones at all and thus will not be able to have children of my own."

2007
Shannon was only 24 when she was rushed to emergency and the doctors found "many pulmonary emboli," she said. "I was put on heparin and coumadin for 6 months…My doctor said I have no predisposition to get blood clots and it was a direct result of the Patch."

Davida is worried: she suffered from a transient ischemic attack (TIA), often referred to as a "mini stroke " and then a full-blown stroke. "Once you have a stroke you are at a greater risk of having other strokes," she said.

Elizabeth never thought it would happen to her: she developed a pulmonary embolism in her lung and said, "I will never able to use hormone therapy or birth control ever again; I still have occasional pain in the back of my leg and worry about DVT…"

More ORTHO EVRA News
Alishia filed a complaint with LawyersandSettlements in October, 2007. " I started wearing the Patch in April 2005 and started having chest pains, leg pains, severe headaches and very irregular periods, so I stopped using it," she said. But it was too late. "After doing some tests, the doctors couldn't find any blood clots but I had a stroke a few weeks later." Alishia was only 28 years old when she had a stroke.

2008
Brooke said her step-daughter had a stroke: she is only 17. Sarah is just a few years older and reported that she spent a few days in hospital after suffering a stroke. "The doctor told me it was because of hormones in the Ortho Evra patch that I used," she said.

And finally, Carlie's mother said her daughter was known at the hospital as "the 16 year old with a blood clot…She has been denied life insurance and realizes that this is a life long problem and would like to be compensated in some way for this," said her mother. Carlie was diagnosed with a blood clot in her lung shortly after using the Ortho Evra Patch.

Are all these women going to receive enough compensation for the pain and suffering they went through?