In 2005 Mike was scheduled for his third colonoscopy and had taken Oral Sodium Phosphates as instructed by his physician. "I followed directions completely, from the manufacturer's label and my doctor, and took two full bottles of the Fleet Phospho-soda," says Mike. "Everything went fine but in the recovery room I had this tremendous thirst…" 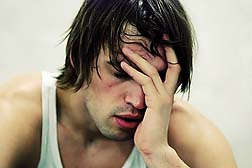 Mike was given a glass of fruit juice and soon afterward went out for breakfast with his wife. "I drank about a pitcher of water, which was unusual for me," adds Mike. "We got home and for several days I didn't get better; I was very fatigued, nauseated, weak and bloated. On the following Monday I looked at my discharge papers from the hospital and it described the symptoms I was having. 'Call your doctor if you are experiencing any of these side effects,' it said. So I called my physician and he said to call back in a few days if I didn't feel better.

By Wednesday I was worse so I went directly to the ER. The doctors did all kinds of tests, including blood and urine. I had been there about 6 hours when several doctors came into my room and said my kidneys have failed. 'Jeez how could that happen?' I asked. They said they didn't know but wanted me to stay in the hospital.

I wasn't going to stay there—hospitals can make you even more sick so I went home and told them if it gets worse, I will come back.

The hospital doctor set me up with a kidney specialist. The following week I saw him and he conducted even more tests. He [the nephrologist] agreed with the original finding—that my kidneys were compromised; he said my creatinine levels were extremely high.

(This from medicine.net.com: "Creatinine is a chemical waste molecule that is generated from muscle metabolism. Creatinine has been found to be a fairly reliable indicator of kidney function; it is transported through the bloodstream to the kidneys, the kidneys filter out most of the creatinine and dispose of it in the urine, but as the kidneys become impaired for any reason, the creatinine level in the blood will rise due to poor clearance by the kidneys. Abnormally high levels of creatinine warn of possible malfunction or failure of the kidneys.")

More Oral Sodium Phosphate News
"Eventually the creatinine levels came down but they are still high," says Mike. "I get them checked on an annual basis and I am told that there is no instant cure. My doctor told me that he doesn't recommend Oral Sodium Phosphates anymore—there are alternative meds.

Although I am 73, I am very active—I go white water rafting and work out regularly and I am an outdoorsman. I have never had kidney problems in the past nor is there any family history of kidney failure. I couldn't understand why this happened, until my wife was watching TV one evening and saw an ad about the dangers of OSPs. Then I went online and realized that the OSPs I had during my colonoscopy were likely to blame for my kidney problems.

You often wonder if health problems like this—my Creatinin levels are borderline high—are just one of the problems of getting older; is it just a part of aging? I know I have another 20 years or so left as long as I don't take any more bad meds, like these OSPs"