It's a sad state of affairs when a US veteran comes home from Afghanistan only to find himself unemployable due to respiratory problems as a result of breathing toxic fumes day after day at military open pit burn sites. David choked back his tears as he told this reporter how he has lost just about everything, including his will to live. 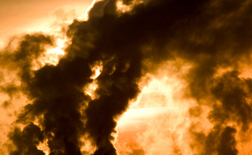 So far David hasn't been able to get any help from the VA and he is living on about $800 per month—no wonder he is suffering from depression. He has lost his job due to severe respiratory problems: having no job spells hardship and David now faces losing his home. He's lost just about everything else: David claims his health and financial problems stem from the open pit burn site, right next to where he was stationed for a year…

"I was deployed to Bagram, Afghanistan in 2009 and we stayed in tents just outside Parwan Prison," says David. "Right beside us was a mine field that wasn't cleared and next to that was the open burn pit. There was so much trash that they ran it 24/7. The pit was made out of steel casting, but due to so much heat, the steel casting melted—I have pictures to prove it. We couldn't believe how hot it was and a big black cloud of smoke billowed over our entire tent area—the whole compound—every single day.

"The reason we stayed in tents was because the people responsible for housing were so far behind—the prison was priority and soldiers were secondary. I was a cook and worked 15 hour days; it was stinking hot cooking three meals a day for 1,500 soldiers. And breathing toxic fumes from the burn pits on top of that was sheer hell. The MP's were better off; they worked behind the prison walls so they didn't breathe the fumes.

"Before being deployed, I was the epitome of health: I passed the army's physical fitness tests every year. Now I suffer from debilitating respiratory problems. In June 2010—while I was in Texas for the Wounded Soldiers Program (I injured my foot, elbow and head in a fall)—I couldn't catch my breath and wound up in a VA hospital.

"The doctor at the VA hospital asked me where I was deployed. When I told her Bagram, she asked if I ever wore inhalers. The Bagram hospital gave them to us—we wore them at night after our shifts because we literally couldn't breathe. Coincidentally she had just seen a vet 20 years younger than me (I'm 50) who worked in Bagram and he was also suffering from respiratory distress. That's when she decided to put a scope on me. 'Ohmigod, there is so much wheezing you need an x-ray of your chest,' she said. One month later I got a call telling me to go to Wade Park, the biggest VA hospital in Ohio, for further testing. Now I'm anxiously waiting for the results.

"Last Monday I filed a DAV (Disabled American Veterans) Claim—the military helps you file at no charge. They kept asking me how many medical appointments I had made and I told them that I have no insurance, no job. What I need is a lawyer…

More BURN PIT News
"I had to quit my job last month. I took boiler system parts into a paint booth and sprayed them with paint. Even though I wore a respirator I couldn't breathe wearing it. I got home and had to tell my wife that I quit my job. She was crying: 'How are we going to make ends meet?' I have no idea."

"I get so depressed; I started drinking at 9 am this morning. I keep a loaded gun in my garage, I'm just so sick of everything. I had it all—I had a Harley and a little sports car—but I had to sell everything. My house is next. I can't talk to my neighbors—I'm so embarrassed, I feel like I can't pull my weight anymore. My life has gone to shit because I can't work and I can't get benefits. When is the government going to realize that these open pit burn sites destroy lives?"