The US District Court’s dismissal of the multidistrict litigation, In re: KBR, Inc., Burn Pit Litigation is about more than Iraq and Afghanistan burn pits. The exhaustive opinion demonstrates why it is so hard for veterans and their families to sue military contractors when they are hurt because contractors fail to exercise appropriate care in the discharge of their duties. As the nuts and bolts of modern warfare are delegated more frequently to private contractors, this issue is likely to come up again. 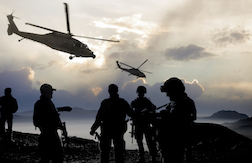 State courts, where most personal injury lawsuits are brought, generally have no jurisdiction over the executive branch of the federal government, including the US military. But the doctrine of sovereign immunity, as this principle is known, has exceptions, and the exceptions have exceptions of their own.

The Federal Tort Claims Act (FTCA) permits private parties to sue the United States in a federal court for most civil wrongs committed by persons acting on behalf of the US. Someone who is injured by a Department of Agriculture contractor, for example, might be able to sue in federal court. However, the Supreme Court has ruled that the US is not liable under FTCA for injuries to members of the military sustained while on active duty and not on furlough, when those injuries are caused by the negligence of others in the armed forces.

The question of whether military immunity shields contractors as if they were “in the armed forces” has been hotly litigated, including in cases involving the torture of prisoners at the Abu Ghraib military prison (involving the Alien Tort Statute) and the freakish electrocution of an Army Staff Sargent as he took a shower in his barracks.

A few principles have emerged from these and other cases:
• Contractors enjoy greater protections in active combat zones where the functions they perform are intrinsic to the military’s combat readiness;

The In re: KBR, Inc., Burn Pit Litigation plaintiffs filed a Notice of Appeal to the Fourth Circuit on August 4, 2017, so the case will go on for them. As in any appeal, however, the odds are fairly long. Future litigants may find themselves in a stronger posture where they can show that contractors’ actions are not essential to a military mission or that they are in contravention of contract terms or operational directives.