Are Military Burn Pits Only Part of the Story?

It now, apparently, has a handle: "Iraq-Afghanistan War Lung Injury." At least that's the name attached to a condition thought to affect as many as 80,000 soldiers deployed in Iraq and Afghanistan who have returned with lung problems and breathing difficulty. 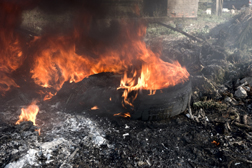 There has been growing speculation that troops returning from deployment are often bringing home with them lung problems, although there remains fierce debate amongst scientists and the military community as to what might be causing the issue, and if it is as widespread as some make it out to be.

It is hypothesized that air particles in those areas to which troops have been deployed over the last decade, carry fine air particles much smaller than that found in the US as a whole. Such particles are suspected of containing metals, toxins and other nastiness that is getting into the lungs of deployed military personnel and not letting go.

But the military itself may be contributing to the problem through the use of open-air burn pits used to incinerate garbage and other military debris.

According to an article published June 20 in The New York Times, Dr. Robert F. Miller of Vanderbilt University conducted lung biopsies on 56 previously deployed veterans. The vast majority of participants—40—were found to be suffering from constrictive bronchiolitis, a condition characterized by scarring of the small airways than can make even moderate exercise by a relatively young and otherwise fit individual extremely difficult.

That's what happened to Gary Durham of Smyrna, Tennessee. A previously healthy American who could run two miles in under 13 minutes during basic Army training, Durham returned from a year-long deployment in Iraq in far worse health than what he was used to. Suddenly, just mowing the lawn left him gasping for air.

And yet a series of standard tests proved inconclusive. In 2005—a year after he returned from Iraq—an Army doctor suggested that Durham's problem might have been in the soldier's head.

It wasn't until he heard of Dr. Miller's work last year at Vanderbilt that Durham approached the specialist for help. A lung biopsy confirmed constrictive bronchiolitis, for which there is no known cure.

It should be noted that the Millennium Cohort Study determined that 14 percent of deployed troops were returning to US soil with respiratory problems—compared with 10 percent of soldiers who did not deploy. That comparison, when extrapolated across the two million troops who have deployed since 2001, works out to as many as 80,000 military personnel with the potential for post-deployment breathing problems.

Many troops reported coughing, wheezing or chest pains that appeared to originate while they were deployed, and continued on after arriving home from active duty.

The military, for its part, suggests that current study results are lacking and inconclusive. It notes that symptoms can vary according to genetic predisposition, or whether or not a soldier smoked. There is also some dispute as to whether the effects are permanent or temporary.

Both sides agree that more research needs to be done.

Durham's problems have not gone away seven years after coming back from Iraq, although he is relieved to have finally been apprised of a diagnosis. "I had been told there was nothing wrong with me by so many doctors," Durham said in an interview. "I just wanted to know what was wrong with me."

For his part, Dr. Miller noted his concern that "these guys come back from war, can't do a two-mile run and then are dismissed from the Army.

"They are told: 'Maybe you're out of condition'…"

More MILITARY BURN PITS News
The pulmonary consultant to the surgeon general of the Army concedes there would be "some increase in respiratory symptoms, and maybe even respiratory diagnoses," Col. Lisa Zacher said in comments published this morning in The New York Times. "But I think we'll find the majority who deploy do not have long-term chronic pulmonary diseases related to deployment."

Military burns pits have been the focus of numerous Senate hearings and Pentagon studies. These latest findings, combining the potential hazards of open-air pits and fine particulates in the Afghanistan and Iraq air, should renew the dialogue. Further studies could help determine just how widespread the problem is.

In the meantime, constrictive bronchiolitis is akin to "sucking air through a straw," according to Dr. Miller. For Gary Durham, who served his country in Iraq for a year, the aftermath is very real. And seven years on, it's not going away…

My experience with the sidewalks of Orange County may be the same or worse than Iraq. That is the use of dimensional sciences and witchcraft to attack people and spy. IT IS REAL.

Not that anyone wants to tell their neighbor or police that there has been a ghost assault or a spirit murder. Too bad! The loss to our intelligence and our overall health is severe. Where do babies come from.

Posted by
Gary Durham
on June 25, 2011
Cool I never thought I would be an advertisement