Senator Tom Coburn called on the head of the Social Security Administration (SSA) to review the health status of people who were represented by a legal firm that is facing scrutiny for its handling of Oklahoma disability claims, The Wall Street Journal reported. 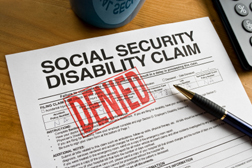 According to the news source, the request of SSA Commissioner Michael Astrue came following a separate article from the Journal that described how certain employees at the law firm allegedly withheld key medical information from the government. These individuals allegedly hid the details of disability applicants who were represented by the firm.

The Journal reported that the SSA is expected to publish a new policy Friday to tighten control of firms that represent people seeking disability benefits. According to the original article, five former employees for the company noted that workers would routinely withhold medical information from the government if it might hurt a client's case.

These withholdings would generally include assertions from a doctor concerning the patient's ability to work or lift heavy objects. According to the news source, shielding such data from the government could increase the client's chance of winning benefits, but would also violate federal law.

More OKLAHOMA SSDI News
The Oklahoma Senator, the top Republican on the subpanel overseeing Social Security, called the company's practices "potentially fraudulent" and spoke to concerns over the "number of disability beneficiaries that are potentially improperly receiving benefits."

According to the news source, the request by Coburn represents a growing push on Capitol Hill to scrutinize the Social Security Disability Insurance system, which has become overwhelmed due to the high number of cases.

The Bixby Bulletin reported that a series of proposed rules changes that could potentially affect programs for Oklahoma residents with disabilities will be the focus of a hearing held by the Oklahoma Department of Rehabilitation Services and the Oklahoma Rehabilitation Council. These alterations may affect citizens in the state who had previously enjoyed services offered by the federal government.
READ ABOUT OKLAHOMA SSDI LAWSUITS