Beaten Down: Nursing Home Abuse Citations on the Rise

As an aging population puts a greater importance and strain on nursing homes, seniors residences and assisted living, concern is mounting over nursing home safety, and the apparent rise in nursing home abuse.

Just prior to Christmas, it was revealed that serious reprimands for dangerous conditions at nursing homes had increased 22 per cent over a six-year period ending in 2006. These citations can run the gamut from not providing patients their necessary meds, to cases of physical and sexual abuse of residents.

The data, obtained through records from the US Centers of Medicare and Medicaid Services (CMMS, the authority which regulates nursing homes in the United States) for a study sponsored by the publication USA Today, does not specify if such cases of abuse are between residents, or between residents and staff. 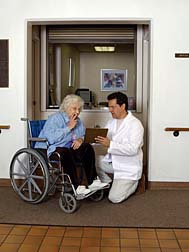 The good news—if there is any—is that quality of care has not diminished, according to a spokesperson from the New York Health Department in comments appearing in United Press International. Jeffrey Hammond revealed that regulators are being more rigorous in their enforcement procedures and protocols. Many states have stepped up inspections, in recent years.

Due diligence in the inspection process will become even more important in the years to come as the swell of Baby Boomers migrate to retirement. Given the huge population wave, retirement living in any form is expected to represent huge business opportunities. It is also expected that retirement living will be a tale of two extremes as seniors, healthier by far than a generation ago, will be looking for a residence that speaks to their active lifestyle. Rather than a barren cubicle, rooms with a view, spas, health clubs and other perks will be sought after by those who are healthy enough to enjoy them, or have the financial resources to pay for them.

That said, there will always be a need for more conservative residences along the lines of traditional nursing homes—and as the Boomer age wave advances, so too will the need for elder care and assisted living in the traditional sense.

Little wonder, then, that private investment firms are eyeing nursing homes as targets for acquisition. Case in point: the recent purchase of HCR Manor Care by a private equity firm for $4.9 million dollars. The Carlyle Group now owns 29 nursing homes throughout Florida, and is awaiting the arrival of a nursing home license in order to carry on operations.

While the purchase may be good news for Manor Care and its residents, some aren't so sure. Some Manor Care properties have been previously cited by a nursing home watch list in Florida, for providing inadequate care for nursing home patients. The arrival of a new owner could signal pending improvements in service.

However, others are afraid that such purchases are made for the quick buck, where a new owner will gloss over problems and cut costs in order to improve profitability, then sell for a tidy sum.

According to a New York Times investigation, as outlined in NewsInferno.com, facilities owned by private investment firms scored worse than national rates in 12 of the 14 indictors regulators use to track ailments prevalent in nursing homes.

What's more, according to data attributed to the CMMS, residents of nursing homes held by private equity suffer more from depression, loss of mobility and the loss of ability to bathe, and dress themselves. Federal and state regulators have said that citations for things such as restraining residents for long periods, and the serving of moldy food have increased at every nursing home owned, and controlled by a private equity firm.

It appears that the days of the small, family-run nursing home where residents are treated like family are few and far between, and their days may be numbered.

More News
Meanwhile, nursing home abuse is on the rise. Many workers complain of long hours and short staffing—a definite disadvantage when dealing with some problematic residents. And while nursing homes have been cited for everything ranging from serving cold food, to not managing catheters properly to the detriment of the patient, there are other issues at play. Some residents can be aggressive, especially those suffering from dementia. And this appears to be an increasing problem. In Canada, for example, expensive psychiatric beds are being shut down. Elderly psychiatric patients often wind up in nursing home beds, which are far less expensive. One described the nursing home as a 'dumping ground.'

Regardless of whether it is a resident attacking another resident or a member of staff, or a staff person abusing and neglecting a resident—there are huge problems now, and with an aging population it is only bound to get worse. In Florida alone, 139 of the state's 650 nursing homes are on the Agency for Health Care Administration watch list.

The problems are systemic right across the country. Until inspections and regulations catch up with the crisis, the crisis will prevail. The only saving grace for a nursing home resident, is due diligence on the part of his or her family to stay involved, and have a presence. So much so that the home, and its staff, have a decided and constant feeling that they have someone to answer to.