It is against the law in Iowa for elder care workers to remain silent when they see examples of abuse. However, according to the 3/18/10 edition of the Iowa City Press-Citizen, the mandatory reporter law—designed to protect some 40,000 care facility residents in the state—is rarely enforced. There is little incentive for caregivers to report nursing home abuse when those who blow the whistle run the risk of reprisal. 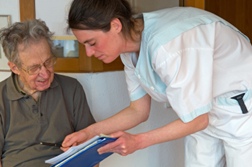 However, those who care enough to speak up recently received some welcome support when state regulators fined three elder care facilities in Iowa for various violations.

According to the Press-Citizen account, elder caregiver Kathlene Roquet was working at the Granger Nursing & Rehabilitation Center in Dallas County this past summer when she and several colleagues reported incidents of verbal abuse against residents at the facility allegedly perpetrated by the facility administrator.

The home was fined $2,000 and a new administrator was brought in. Several weeks later, an 85-year-old resident was found to be in distress, unresponsive and frothing at the mouth. According to the Press-Citizen, an employee attempted to assist the resident and found that the suctioning machine in the crash cart, which would have cleared the man's airway, was not hooked up, and no suction tube was available.

The resident did not survive. Roquet reported the incident to the proper authorities, who cited the home for having inadequate equipment.

Roquet was accused of attempting to pressure co-workers into reporting their concerns, and was subsequently fired.

More ELDER CARE News
Meanwhile, the director of nursing at Windmill Manor in Coralville was accused of threatening to fire seven employees if they reported concerns related to quality control to inspectors. The threat was allegedly made during a luncheon celebrating Nurses Appreciation Week.

The Department of Inspections and Appeals issued fines totaling $5,000 to both Windmill and Granger.

Crossbridge Homes, an assisted living center, was initially fined $1000 and was later fined an additional $7,000 for a host of alleged violations. State inspectors alleged that the former administrator of the facility was demoted in December after faxing a list of concerns to the inspections department. The owner said he was not aware of the administrator's complaint to the state when she was removed from her job.

Law in the state of Iowa bans retaliation against whistleblowers.