On the heels of State Commissioner M. Patricia Smith's message to the New York Department of Labor regarding proactive sweeps across the city for New York Employment violations, a lawsuit filed on December 21 alleges that Giuseppe Cipriani's event, catering, and restaurant enterprise violates federal and New York state labor laws. 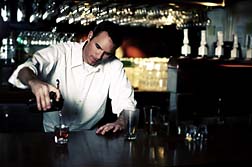 The lawsuit, which was filed in New York federal court on behalf of current and former servers, bartenders, and a co-captain of several Cipriani locations, alleges violations of the federal Fair Labor Standards Act (FLSA) and the New York Labor Law (NYLL).

The plaintiffs claim that Cipriani routinely failed to turn over the service charges paid by customers to the workers who provided their food and drinks. At catered events, gratuities intended for the food service staff also went into Cipriani's pockets.

More NEW YORK LABOR LAW News
If that isn't bad enough for business, the lawsuit also alleges that Cipriani engaged in a policy and practice of "time-shaving," which erases time worked from the time records in order to pay workers for fewer hours than they worked.

Earlier this year, the New York State Department of Labor announced a record $2.3 million in wages recovered for restaurant workers in New York City. More than 800 workers are to be compensated for minimum and overtime wage underpayments. Labor board investigators found other restaurants throughout the city that are in violation of New York Employment laws, and is currently endeavoring to recoup workers' hard-earned wages.

"Nobody wants to dine in a sweatshop, and with this enforcement action, we are slamming the door shut on the mistreatment of workers at every one of these establishments," said Commissioner Smith, who likely will not be dining at Cipriani's anytime soon.

Posted by
Ghost
on October 25, 2015
Can someone email me regarding a possible lawsuit that also involved these laws, as well as other unfair practices that need to be stopped. This man, Giuseppe, has been evading taxes and jail time forever. This company and establishment IS 110% a sweatshop!
Posted by
Derick
on September 1, 2015
As a former employee of this company, I can assert that they still engage in the very actions they were sued for in this case in 2009, till this day.
Posted by
Mark
on June 8, 2015
Who is the current law firm involved ? Thank You