Mosanto and Regulators vs. Consumers

Investigative journalist Carey Gillam weighs in on Monsanto’s herbicides dicamba and glyphosate, how the EPA didn’t do their job and how both chemicals are carcinogenic.

The herbicides dicamba and glyphosate have a lot in common. Both are made by Monsanto, both are associated with environmental problems such as chemical drift and both cause health problems, such as cancer. Nobody knows this more than investigative journalist Carey Gillam. 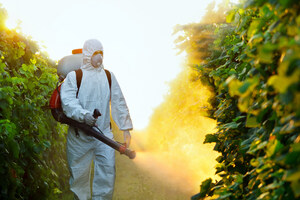 And another similarity: The Environmental Protection Agency (EPA) “almost bends over backwards to protect these products…despite legal and scientific evidence,” says Gillam. On the toxicity scale, dicamba is higher than glyphosate—the active ingredient in Roundup—and lower than 2,4-D, the third most common herbicide. But the EPA said “dicamba is not likely to be a human carcinogen.”

There is one difference. “The EPA did not check all the dicamba boxes like it did with glyphosate, so the agency’s evaluation has come under question,” says Gillam. “How were they evaluating dicamba, and were they doing the wrong epidemiology? Even the Office of Research and Development within the EPA disagreed with its evaluation. So with dicamba, it’s more about how the EPA didn’t do their job.”


New dicamba research published in the International Journal of Epidemiology (May 2020) shows an association with increasing use of dicamba and lung and colon cancer. According to the National Pesticide Information Center, (NPIC) dicamba is found in over 1,100 products sold in the U.S. “When plants are treated with dicamba, they grow in abnormal and uncontrollable ways, and often, the plants die,” it says. Dicamba is so prevalent it has been found in “house dust in farmer's homes,” and the NPIC on its website describes signs of dicamba exposure in pets, including shortness of breath and muscle spasms. So what does this say about human exposure?

Monsanto doesn’t like Gillam. It even planned to target her, thanks to more than 22 years of reporting (mostly for Reuters) on the agrochemical industry, with a focus on Monsanto’s genetically engineered seeds and connecting its herbicides to human and environmental health problems. In 2017 she wrote the book Whitewash: The Story of a Weed Killer, Cancer, and the Corruption of Science, which was praised by the Society of Environmental Journalists and Erin Brockovich, to name a few. She exposes “secret industry communications that pull back the curtain on corporate efforts to manipulate public perception”, how Monsanto smeared the reputations of scientists for publishing research that contradicted business interests, and how regulators signed off on glyphosate and in so doing, assured consumers that the pesticide was safe.


In August 2018, Gillam wrote in Huffington Post that government email communications showed Monsanto and the EPA in cahoots to stall a toxicology review on glyphosate (the key ingredient in Roundup) conducted by the Centers for Disease Control and Prevention. That same month the first Roundup trial ended with a jury awarding DeWayne Johnson $289.25 million in damages, including $250 million in punitive damages. The jury found that Monsanto’s Roundup was a substantial contributing factor in causing Johnson’s cancer. Monsanto, of course, appealed.


Dicamba was developed because of glyphosate-tolerant crops such as soybeans. Here are a few facts.


The Monsanto Papers includes documents revealing the company’s ghostwriting of an important paper and how Monsanto used that “independent” scientific literature to promote and defend its herbicides. A previous investigation found that Monsanto paid a number of ghostwriters to remove any mention of glyphosate’s toxicity from the safety reports published by the EPA.

Wait, it gets worse. “Colluding with regulators in Trump’s EPA to hide the cancer risks of Roundup is business as usual for Monsanto, but their deceitful and dangerous behavior shouldn’t be rewarded by the courts,” said EWG President Ken Cook, commenting on Edwin Hardeman’s appeal. (Hardeman successfully sued Monsanto in February 2016.)  “[Monsanto] needs to be held responsible for the harm it has and is causing to an untold number of Americans.”

Monsanto acts like it is above the law. When California’s Office of Environmental Health Hazard Assessment tried to add glyphosate to the state’s list of known carcinogens, Monsanto tried to stop the governmental agency by suing it. And court documents have shown that Monsanto and Bayer knew about the risks but downplayed them to inflate profits. Health be dammed.

In March 2020, The Guardian reported that Monsanto predicted its dicamba crop system would lead to thousands of damage claims from US farmers but went ahead anyway, and risks were downplayed to the EPA.

More ROUNDUP CANCER News
Gillam, writing for U.S. Right to Know on June 3, 2020 said that a lawsuit brought by the National Family Farm Coalition, Center for Food Safety, Center for Biological Diversity, and Pesticide Action Network North America accused the EPA of breaking the law in evaluating the impacts of a system designed by Monsanto. But a federal court found that the EPA “refused to estimate the amount of dicamba damage”, failed to acknowledge that restrictions it placed on the use of the dicamba herbicides would not be followed, and did not acknowledge evidence that the new use of dicamba herbicides would “tear the social fabric of farming communities”.

The EPA and Monsanto did not mention that dicamba is associated with cancer, just like glysophate.

Carey Gillam is research director of U.S. Right to Know, a nonprofit investigative research group focused on the food industry. She is the author of the award-winning book, “Whitewash: The Story of a Weed Killer, Cancer and the Corruption of Science” and a veteran journalist, researcher and writer with more than 20 years of experience in the news industry.