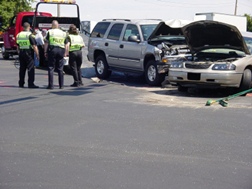 James Farrar, the driver, was speeding home with his 14-year-old brother Joshua when he suddenly lost control of the vehicle, crossed the median divider and struck a passing truck in the oncoming lane. The Farrars' vhicle continued to roll across the street, eventually crashing into a nearby fence. The initial impact sent James through the windshield. Joshua, who was in the passenger seat, suffered serious internal injuries and lacerations from the collision. He passed away the following night.

The driver of the truck, 58-year-old Roger Bolle, was listed in serious condition, but is expected to survive the incident, according to KMOX.com.

Investigators have yet to determine an exact cause for the incident, though it has been determined that neither Bolle nor the elder Farrar brother had been wearing their seat belt at the time of the accident. Reports also indicate that Joshua Farrar had been properly restrained.