A number of people were injured in recent Missouri traffic accidents that occurred over the extended Memorial Day weekend, reports the Southeast Missourian. 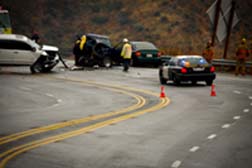 According to the news source, four Jackson residents suffered moderate injuries on Saturday, May 28, in a two-vehicle accident in which a 16-year-old driver did not yield to another car at an intersection approximately three miles east of the city.

Zariya Hitchcock, a five-year-old passenger in the car being driven by 16-year-old Cody Lunsford, was transported to the hospital, while the driver and passengers in the vehicle that was hit were also injured, the news source said. One passenger, 12-year-old Audrey Rea, was taken to an area hospital in a private vehicle.

According to the Missouri State Highway Patrol, in the early hours of May 29, a woman from Leopold and a man from Marble Hill sustained injuries in a crash in Bollinger County. The report from the highway patrol indicated that 17-year-old Rachel Vance was unable to navigate a curve and hit a power pole, which caused the car to be turned on its side.

Vance was reportedly taken by ambulance to Saint Francis Medical Center, while her passenger, 23-year-old Levi Snider, reportedly attempted to seek his own medical care for injuries he sustained.

Another Missouri accident that occurred over the Memorial Day weekend involved a family of three from the town of Chaffee, each of whom suffered minor injuries when a vehicle failed to yield and struck their car. According to the highway patrol, the driver of the vehicle that failed to yield, 19-year-old Charles David, also sustained minor injuries. The accident occurred on the afternoon of May 29.

More MISSOURI ACCIDENTS News
The following weekend, on June 4, a woman and her three-year-old child were not so fortunate, as they were reportedly killed in an accident approximately one mile south of Poplar Bluff, Missouri.

Local ABC affiliate KAIT reports that 36-year-old Naylor resident Robin Steele and her young child, Jayden Baugus, were traveling southbound on Highway 67 when the woman reportedly lost control of her vehicle and collided with a pickup truck.

According to the Missouri State Highway Patrol, the car and truck both flipped in the accident, which also seriously injured 32-year-old passenger Trisha McGaaughy. The driver of the pickup truck, 52-year-old Cleveland Koonce, sustained moderate injuries and was transported to a nearby hospital, the news source reported.