A Missouri car crash took the life of a promising Northwest Missouri State University student on May 6. According to Missouri State Highway Patrol, the car went out of control around 11 pm and crashed, injuring the driver and killing the 19-year-old passenger, Waylon Martensen. 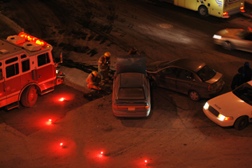 The 5/10/10 edition of the US Fed News recounted the results of the crash, based on a news release issued by Northwest Missouri State University. The state Highway Patrol report that the driver, a 20-year-old man from California, Missouri, veered off to the right side of the road, before over-correcting and traveling off to the left, where the car overturned and struck a tree.

Neither occupant was wearing a seat belt and both were ejected from the vehicle. The driver, who was not identified, was taken to hospital with a serious injury.

Martensen was also rushed to hospital, but was pronounced dead at 3:58 am on the morning of May 7, about five hours after the crash.

More MISSOURI ACCIDENTS News
The deceased victim of the Missouri auto accident was a member of the Northwest Missouri State track team, but was prevented from traveling with the team to Pittsburg, Kansas for the MIAA Championship this weekend, due to an injury to his shin. Head Coach Scott Lorek said that Martensen had already begun training for the cross-country season in the fall.

"He was a huge part of the team personality-wise," Lorek said. "There are some kids who are so full of fun and just really enjoying every moment, and he was that kind of kid. Everybody knew him, everybody enjoyed him."

The investigation into the Missouri highway accident is ongoing. It is not known whether there was a mechanical issue with the vehicle, or if weather, fatigue or other factors contributed to the Missouri car crash.