The snow and icy conditions that have affected a number of states during this winter of endurance have taken their toll on motorists. One of the latest in the roster of Missouri accidents occurred just as the calendar clicked over into February. Far from being concerned with the pending appearance of the annual groundhog February 2, a Missouri Highway Patrol (MHP) officer is lucky to be alive. 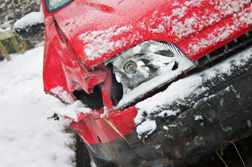 A Licking, Missouri resident, however, is dead.

According to a February 2 Associated Press (AP) report, 55-year-old Karen Chambers was navigating her SUV northbound on US 63 when, according to AP, she lost control of her vehicle on the slippery road conditions and collided head-on with a southbound patrol car driven by a member of the MHP.

Reports indicate that both drivers involved in the Missouri traffic accident were wearing seat belts. The patrol officer sustained what was described as moderate Missouri accident injury. The driver of the SUV, however, did not survive.

The crash happened around 5:20 am, about 12 miles south of Rolla.

It was not reported whether or not the family of the deceased would be in touch with a Missouri accident lawyer. Nor was a cause for the accident given, although AP noted that the highway was snow- and ice-covered at the time of the Missouri car crash.

More MISSOURI ACCIDENTS News
To that end, the wintry weather that has been whipping Missouri and several other states has prompted police and the law-enforcement community to remind motorists about adapting to weather conditions. About a week after the 10-inch snowstorm that may have contributed to the death of the Licking resident, Springfield received two additional inches of snow on February 9.

Even with less snowfall and storm intensity, the Springfield News-Leader reported February 10, that local police had responded to just about the same number of calls amidst the quieter snowfall, as they did at the height of the more intense storm of a week prior.

Some areas of the country not accustomed to seeing much snow—Texas among them, during Super Bowl weekend—may not have the necessary snow-clearing equipment and protocols in place. Was that the case in Missouri? Missouri auto accidents due to poor roads could be the result of severe weather and/or the latter playing havoc with snow-clearing capacity—however limited or thorough it may be.