LAWSUITS NEWS & LEGAL INFORMATION
Home Page >> News Articles >> Alcohol not the Only Cause of Impaired-D..

Alcohol not the Only Cause of Impaired-Driving Accidents

A man who was involved in a Missouri car crash faces charges of felony first-degree involuntary manslaughter after his Missouri car accident resulted in the death of his wife. Drivers who use drugs and are involved in Missouri accidents can face harsh penalties as a result of their Missouri auto accidents. 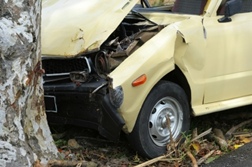 According to the Southeast Missourian (01/05/11), Daniel White was charged with felony first-degree involuntary manslaughter for driving while intoxicated causing death. The report notes White told investigators that while he was driving on September 12, 2010, he swerved to miss a deer. The vehicle ran off the road and hit a culvert and several trees. Although investigators noted that White appeared intoxicated, they could not smell alcohol on his breath.

Investigators determined that White was impaired by drugs, including Zoloft, crack cocaine and marijuana.

More MISSOURI ACCIDENTS News
Although many people equate driving while impaired with alcohol use, drivers who are under the influence of drugs—including prescription medications—while driving can face harsh penalties if they cause a car accident while impaired. In fact, in Missouri, driving while intoxicated includes both alcohol and/or drugs. For those drivers who have consumed alcohol, the maximum blood alcohol concentration is 0.08. A first offense can result in fines of up to $500, six months in jail and a 30-day full suspension.

Those penalties, however, are used if no one is injured in the crash. People who are found to be driving while intoxicated and cause an accident, especially an accident where other people are injured or killed, could face stiff penalties for felony manslaughter.

People who provide alcohol to drivers can also be penalized if those drivers are involved in accidents. An 18-year-old who was involved in a fatal accident has been charged with felony first-degree involuntary manslaughter after driving a car while allegedly intoxicated. The defendant was involved in a car accident in which a passenger in the same vehicle died. Another person has also been named as a defendant for supplying liquor to a minor or to an intoxicated person.