Was Fatal Missouri Accident an "Act of God?"

A Missouri rail accident back in March that killed a rail conductor and injured an engineer was found to have been caused by the railroad track's drainage system, according to an investigation by the Federal Railroad Administration (FRA). Such Missouri accidents, like all rail accidents, are thoroughly investigated. 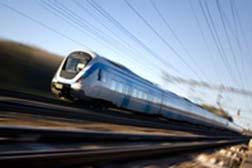 However, as reported December 1 in the Bismarck Tribune, officials with the Dakota Valley and Western Railroad (DVWR) dispute those findings.

According to the Tribune, the doomed train was travelling north from Bismarck to Max towing 31 cars loaded with agriculture product (13 additional cars were empty) when the accident happened March 25 of this year. According to the investigation, the train was approaching an embankment just above Turtle Creek in Missouri when the engineer observed two rail cross ties hanging near a clump of grass or debris near the track.

The investigators found that the engineer applied the train's air brakes about 263 feet ahead of the aforementioned cross ties, but failed to stop the train in time prior to arriving at the compromised embankment. Upon reaching the problematic area, the train derailed and the engines fell to the lower bank, with three engines hovering over them.

Jeff Heitzmann, 46, of Mandan, was serving as the conductor that day. Heitzmann's response to the impending disaster was to head out the back door on the engineer's side in an attempt to jump before the lead engine derailed. The report did not specify if Heitzmann completed his jump or remained on the train. However, the investigation determined that the lead locomotive derailed, rolling to the west and sliding down the embankment. The second engine then derailed and rolled on top of the lead engine.

Heitzmann was fatally injured. The engineer survived and was treated at the hospital with non life-threatening injuries.

The FRA investigation report found "a contributing factor to the accident was the failure of the track's drainage facilities, due to obstruction of its key components.

"At mid point of the derailment...the drainage ditch was obstructed by debris, vegetation and silting which prevented runoff water from draining to the culverts. ...The five culverts also were obstructed by silting and vegetation."

More MISSOURI ACCIDENTS News
The FRA report noted that the combined obstruction of the drainage ditch and culverts affected the capacity to properly divert water, leading to deterioration to the point that it allowed saturation of the track's sub grade.

However, a spokesperson for the DVWR line disputed the report, indicating the track was inspected twice each week and a problem had never been identified in the 20 years the company had operated the track, which was constructed in 1904.

Jeff Wood, vice president of the DVWR railroad, noted in comments published December 1 in the Tribune that in DVWR's view the road bed was damaged by a spring located several feet underneath the track grade.

"The company feels it was an act of God," he said. It is not known if the family of Heitzmann intends on engaging a Missouri accident lawyer in order to seek compensation for alleged wrongful death