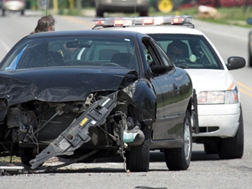 According to official reports, the two officers were involved in a search for two people who had fled from a traffic stop in nearby Topeka. The men were walking along the interstate with a canine officer when a passing van struck one of the parked patrol cars, sending the vehicle careening into the second patrol car, and the patrol car into the officers.

Both officers were rushed to nearby hospitals, where they were listed in serious but stable condition. The canine officer was initially listed as missing, but was later reported to have returned to his master's home. The minivan that caused the crash was found on its side near the site of the crash. Both individuals inside required extradition from the vehicle and are listed in stable condition as well.

Police claim that the two people the officers had been searching for were apprehended later that day.

Investigators have yet to determine a cause for the van's accident.