A school bus carrying high school students to school crashed into a utility pole at approximately 7 am on May 13. No one was seriously injured in the Missouri traffic accident, although the bus driver had to be extricated from the vehicle and five students were taken to hospital for treatment. 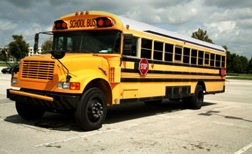 The driver, who was reportedly the most seriously injured, suffered a leg injury. The crash is currently under investigation.

Fox News reported on 5/13/10 that the bus driver was attempting to make a right turn and hit a light pole. Power lines were knocked down and the road was shut down temporarily as a precaution.

More MISSOURI ACCIDENTS News
Meanwhile, a teenager has died from injuries sustained in an unrelated head-on crash, stltoday.com reported on 5/13/10. The victim, Joshua Farrar, was 14 years old and suffered serious injuries when the vehicle his 24-year-old brother was driving collided with a pickup. Joshua's brother, James, reportedly lost control of his vehicle, crossed the center line and crashed into the pickup truck. James died shortly after the crash.

According to patrol, James Farrar was driving too fast for road conditions. The driver of the pickup truck also sustained serious injuries.

In an attempt to make roadways in Missouri safer, lawmakers are considering a bill that addresses truck lane restrictions, speed traps and text messaging. SB781 would increase penalties when large trucks are found in violation of lane restrictions in St. Charles County. If the violation "causes the immediate threat of an accident," truck drivers could face a $500 fine and six months in jail.

The bill would also make it illegal for all drivers to read, write or sent text messages while operating a vehicle. Currently, it is illegal for drivers age 21 or younger to text while driving.