He may have the same name as the long-dead soul singer, but James Brown does not feel good about the C-Qur abdominal mesh used for a hernia repair and the plaintiff, through his surgical mesh lawsuit, has plenty to say about it. 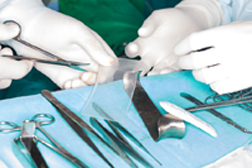 Brown however, in his hernia mesh lawsuit, has much more to say about that. “Defendant Atrium made representations with the intent of inducing the medical community to recommend, prescribe, dispense and purchase C-Qur for use as a means of treatment for hernia repairs, which evinced an indifference to the health, safety and welfare of plaintiff James D. Brown,” the complaint, filed in January, notes.

The surgical mesh side effects lawsuit explains that Brown, who is 56, was diagnosed with an umbilical hernia in December 2013 and had it surgically repaired using Atrium’s C-Qur mesh around the same time. His pain, however, persisted for some time after the mesh was used for his hernia repair.

Court documents note that when Brown learned that the C-Qur mesh may have triggered complications leading to his pain, arrangements were undertaken to have the mesh removed, which was accomplished in January, 2016.

However, the lawsuit claims removing the mesh did not stem the pain. Brown also claims that a pathology report associated with the procedure to remove the mesh identified a “foreign body giant cell reaction” in the plaintiff’s abdomen, which also encompassed the scar tissue surrounding the C-Qur mesh.

Brown asserts in his hernia patch lawsuit that the C-Qur mesh, made of polypropylene, harbored a biological incompatibility with human tissue. The lawsuit also noted that the O3FA fish oil posed a threat to certain patients with an aversion, or an allergy to fish.

Brown asserts the manufacturer not only knew about the problem, but attempted to play down the potential risk after being alerted by doctors to the complication, or so it is alleged. The manufacturer is also alleged to have quietly altered the way in which the fish oil gel was applied to the product without notifying the US Food and Drug Administration (FDA) about what was alleged to be a change in design to the product.

More SURGICAL MESH News
There’s more. Brown asserts in his surgical mesh complications lawsuit that C-Qur mesh retains a high risk for infection despite treatment with ethylene oxide as a sterilization agent. The problem, according to the plaintiff, is an alleged lack of moisture in the product packaging. Moisture, according to the lawsuit, is not only important to promote retention of the O3FA gel on the mesh, but also in helping to eradicate certain infectious cells.

The lawsuit alleges Atrium went completely off the rails by failing to properly investigate adverse reaction reports received by the manufacturer, failed to forward those reports to the FDA, and halted production of the mesh on numerous occasions, which the plaintiff characterizes as a form of recall without notifying either doctors or the FDA.

Amongst other claims, Brown is suing for fraud, negligence, failure to warn and loss of consortium with his wife Kimberly Brown, amongst other claims. James Brown also asserts Atrium is in violation of the Consumer Protection Act of New Hampshire.