The allegations of medical malpractice surrounding the fate of a California man and an operation gone horribly wrong are compelling. The claim is that a noted Fresno cardiologist was responsible for leaving an open heart surgery patient in a vegetative state after the surgeon left the operating theatre before the procedure was complete. 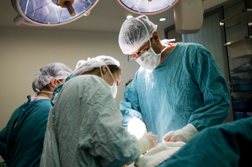 According to a report from KFSN ABC 30 TV in Fresno (1/8/14), the allegation of medical negligence surrounds a procedure required by Silvino Perez. The 72-year-old grandfather entered Community Regional Medical Center (CRMC) for the repair of an aortic aneurysm. Dr. Pervaiz Chaudhry, a surgeon recently praised for his expertise and cutting-edge surgical techniques, was scheduled to perform the surgery.

Court records associated with the medical malpractice lawsuit allege that Chaudhry failed to complete the procedure and instructed a physician’s assistant to finish the operation. Investigators with the California State Department of Health found that Dr. Chaudhry failed to close the patient’s chest before leaving the operating theatre, fostering complications that have left the once-active senior bedridden in a vegetative state.

Silvino’s son told the television station in an interview that the reason the surgeon left the operating room is suspect, according to an anonymous call placed to the stricken patient’s family.

“He basically told me the reason my dad was in the condition he was in, was the doctor had walked out in the middle of an operation to attend a luncheon,” said Cristobal Arteaga, tears welling up in his eyes as he spoke to a reporter.

A spokesperson for CRMC, which is accused of hospital malpractice, noted in a statement that it would be inappropriate to comment in relation to any ongoing litigation. “We have instituted improved safeguards with action plans that have been approved by the state. Community continually trains and searches for ways we can improve our patient care and safety.”

The Perez family has issued a medical malpractice lawsuit against the hospital as well as the attending surgeon. As of January 16, Perez remained on life support, with the cost of his care covered by Medicare and Medicaid. The civil lawsuit detailing allegations of medical negligence on the part of both parties was filed at the end of last year.

A year earlier, in 2011, the co-defendant in the medical malpractice claim was interviewed by ABC 30 after the CRMC lauded Dr. Chaudhry for his advanced work in cardiac medicine. As of early January, the hospital confirmed that Chaudhry was still employed at the facility.

Perez’s son is unapologetic. “It’s a betrayal,” he told the television station in an interview, detailing the alleged doctor mistake. “They are covering something up. The nurse went on to say the only reason they have this guy on is he brings so much money into the hospital,” Cristobal Arteaga continued. “That’s the only reason they haven't done anything yet.” It has been reported that the anonymous call to Perez’ family was made by a nurse who was in the operating room at the time.

Chaudhry is affiliated with Valley Cardiac Surgery (VCS) in Fresno. The New York Daily News reports that the COO of VCS, Bruce Eliason, notes that VCS has not been served. “This assertion [of leaving the operating room] apparently made anonymously to the patient’s family, is unequivocally false, and it will be proven to be so,” Eliason said in a statement.

More MEDICAL MALPRACTICE News
The New York Daily News reported that state investigators were tipped off by an anonymous call April 11, 2012 - about the time the operation took place. A subsequent investigation found that Chaudhry had violated hospital protocol that prohibits the primary surgeon from leaving an operating theatre before the patient is confirmed to be stabilized.

According to the report, the Perez family was similarly alerted by an anonymous call this past October. Perez’s wife, Maria A. Arteaga Alvarez, and Cristobal Arteaga, filed their medical malpractice lawsuit December 23, 2013, in Superior Court, State of California, County of Fresno.

Posted by
Dana
on September 13, 2014
I have almost the exact same story, My father was 73 had a hemo bleed,cardiac arrest, life support then death, my beloved father passed away sept 7. 2014