Although the hospital is the place where people go to heal from serious injuries, sometimes medical malpractice results in patients being worse off than they were before they went to the hospital. Medical negligence, including burns caused by improper procedures in the ER, can cause serious injury to patients. Medical malpractice lawsuits have been filed alleging that medical negligence on the part of hospital staff resulted in severe injury to victims. 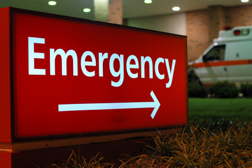 One hospital burn lawsuit was filed against the Bethesda Hospital in Ohio, alleging that a botched gynecological procedure resulted in an infection and in the patient developing severe blisters. The medical malpractice lawsuit alleges that a superheated saline solution scalded the patient's vagina and rectum. The plaintiff further alleges that she was sent home without being informed of the scalding and without treatment for the burns.

More MEDICAL MALPRACTICE News
Earlier this year, a family filed a lawsuit against Presbyterian/St. Luke's Medical Center after a fire that started during surgery burned a premature baby. The baby, who was 13 days old at the time of the fire, was undergoing surgery to fix a heart valve that had not properly formed. According to the Denver Post (05/28/10), flammable oxygen was trapped under the surgery sheets and ignited when the doctor tried to cauterize an incision on the baby.

Although the fire occurred seven years ago, the victim's parents say she is still recovering and has scars on her right hand.

Burn injuries can be caused by heat, chemicals or electricity. Serious burns can permanently scar the patient, requiring skin grafting and other treatments. Furthermore, burns can make a person more susceptible to infections and other serious complications.

If burns are sustained as the result of medical malpractice, patients may be able to file a medical malpractice lawsuit against the person and/or organization (including the hospital) responsible for the injuries. Medical malpractice claims can be filed against anyone involved in providing medical care, including doctors, nurses and other medical staff at a hospital.

If you or a loved one have suffered losses in this case, please click the link below and your complaint will be sent to a drugs & medical lawyer who may evaluate your Medical Malpractice claim at no cost or obligation.
Request Legal Help Now