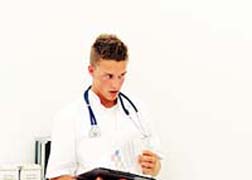 Unlike some states, there are no caps for Illinois medical malpractice. Some think there should be. Others, such as the author of an editorial published January 28 in the Chicago Daily Herald, feel that such caps should be implemented and standardized across the entire country.

Meanwhile, a controversial study by researchers at Chicago's Northwestern University appears to suggest that many of the graduating medical students who leave the state of Illinois to practice medicine elsewhere, do so due to an unfavorable malpractice liability environment.

The research found that 49 percent of 561 med school grads questioned in the Illinois New Physician Workforce Study intended to leave the state of Illinois to practice elsewhere—frequently in bordering states—citing "overall practice opportunities."

However, the study authors maintain there's more to it than that.

"The majority who were planning to practice outside of Illinois indicated that the decision affirms their decision to leave the state and reinforces the negative environment they believe exists due to a lack of tort reform, high medical malpractice premiums, a litigious environment, and what they perceive to be a state legal profession that is anti-physician," the researchers wrote.

"Several respondents explained that the litigious environment in Illinois has created a new defensive way of practicing medicine that is no longer focused on the best interests of the patient but rather on avoiding liability by the provider. Many of the new physicians do not wish to practice in what they refer to as a hostile environment."

Various media reports suggested that 70 percent of grads were leaving the state due to the unfavorable malpractice environment.

Critics of the report cite the current over-saturation of physicians in Chicago as a contributing factor, together with the preference for an Illinois graduate to return to his or her home state to practice medicine. And survey respondents suggesting that Illinois malpractice insurance premiums were too high, sat at about 35 percent.

However, not lost in the debate are the results of a recent ruling from the Illinois Supreme Court that struck down laws limiting damage awards—finding that such limits were unconstitutional.

Chicago Daily Herald editorialized on January 28 that the idea of caps on medical malpractice awards held some merit. However, the cap should be implemented nationally, rather than state-by-state. The newspaper cited as examples, the observance of a $250,000 cap for medical malpractice pain and suffering observed by Indiana, whereas Michigan maintained a $280,000 cap. Wisconsin, however, observed a $750,000 cap.

More MEDICAL MALPRACTICE News
There is no such cap in Illinois, and there likely will not be anytime soon given the Supreme Court ruling. As for the variance in cap value by state, "the patchwork approach creates a crazy quilt of instability," the Herald says. "Is, for instance, the amputation of a wrong leg worth more in Wisconsin than Indiana? As it currently stands, it could be, but it shouldn't be that way. And the variance in caps shouldn't be factored in by some doctors and lawyers when they are deciding where to practice."

Whether or not the lack of Illinois medical malpractice caps and high malpractice insurance premiums serve as the motivating factor in this issue has yet to be determined. However, all agree that when a doctor screws up and an innocent patient is harmed, someone has to be made to pay.

"Let us be clear," says the Herald. "If a doctor, surgeon or health care practitioner is found to have made a mistake that hurts someone, or worse, contributes to someone's death, they should be made to compensate for that error and cover the costs associated with it. But a uniform ceiling on those costs should be created nationwide."

Posted by
Joe K.
on February 11, 2011
Compared to most parts of the United States, Medical Malpractice Insurance rates are higher in the state of Illinois, especially for those that practice in Cook and collar counties and Madison and St. Clair counties. Given this, rates for the rest of the state are competitive to some of the less litigious states. Aslo based on historical rates, the rates in Illinois today are about as low as they have been in over a decade. There are more carrier options and availabiltiy is at an all time high. This competition has created arelatively soft market by Illinois standards and shows no sign of hardening.