A study in 1999 concluded that medical errors claim anywhere from 44,000 to 98,000 lives each year in the United States. And that fact has been brought home by a recent incident at a hospital in New York, after a woman underwent an unnecessary operation and died from complications after surgery.

While health officials concluded back in October that the hospital had taken adequate corrective action in that particular case, the Mercy Medical Center on Long Island is currently being investigated over the deaths of three other patients.

The investigation was launched after a doctor lodged a complaint, alleging that a physician's assistant had improperly inserted catheters, chest tubes and pacemakers into patients, according to a story appearing this morning in the New York Times. The doctor, identified in the story as Anthony Colantonio, noted that three of the patients died: a 65-year-old male and a 64-year-old female last summer, and a 19-year-old woman in October. 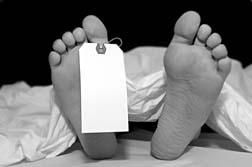 However, it is the recent death of a woman in her early 30's that is the most heart breaking. Given the news that cancer had been detected in her left breast, the woman opted for a double mastectomy. Cancer ran in her family, and she knew she had to act swiftly.

It turns out that she acted in vain, as the hospital lab had mixed up her lab report with that of another woman who did, indeed, have a tumor in the left breast. According to the New York State Department of Health, the pathology report following the woman's surgery revealed no tumors present in her breasts.

Sadly, the woman was not around to hear the news. She died May 26th, the day after her operation, of complications from surgery she didn't need. Ironically, had she survived, the woman would have had to deal emotionally with the unnecessary surgical removal of her breasts.

In the hospital's defense, there have been cases where patients had died, "and death was necessarily the expected outcome," said Claudia Hutton, a spokeswoman for the New York State Health Department, in comments published this morning in the New York Times. "These things can happen without fault at times."

Indeed, patients can slip away despite Herculean efforts by doctors, nurses and surgeons to prolong, or save their lives.

However, a death that could have absolutely and definitively been prevented, as it was ultimately initiated by a clerical error, is beyond comprehension.

A hospital spokesman, in a statement, said the hospital was "deeply saddened and profoundly regrets" the error.

A review by the Institute of Medicine, a research arm of the National Academy of Sciences concluded almost a decade ago that medical errors are responsible for tens of thousands of deaths each year in the United States.

The review did not reveal, or specify if such errors are the result of inexperience, incompetence, or exhaustion from the long hours, and extended shift often required in a medical setting.

The woman's name was not released.