The largest for-profit hospital chain in the US is awash with allegations of unnecessary cardiac procedures, according to an exhaustive report in The New York Times (8/6/12). HCA, which operates 163 facilities across the country, has reportedly uncovered evidence, by way of various internal investigations, unjustified procedures at several hospitals as far back as 2002 and as recently as 2010. 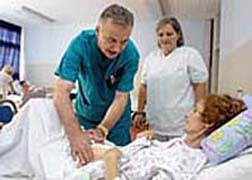 A good illustration is provided by nurse C.T. Tomlinson. A travelling nurse, Mr. Tomlinson had experience at more than a dozen catheterization labs before arriving at Lawnwood Regional Medical Center, the HCA facility at Fort Pierce, Florida.

Tomlinson questioned the surgeon, but was politely rebuffed. The male nurse reported looking at the others in the room, who all just shrugged, he said. The stent was duly inserted by the cardiologist, but the story doesn't end there. Tomlinson reported his observations to Lawnwood officials, and the hospital opened an investigation. An outside reviewer questioned 13 out of 17 cases performed by the particular cardiologist, including unwarranted cardiac catheterizations and patients who were needlessly subjected to multiple procedures.

"The allegations related to unnecessary procedures being performed in the cath lab are substantiated," according to a confidential memo written by a company ethics officer, Stephen Johnson, and reviewed by The New York Times.

Shortly after reporting his findings, Tomlinson's contract was not renewed by the hospital. The Times reports that Johnson's memo suggested Tomlinson was retaliated against for his actions.

The Times investigation reported that cardiology is lucrative for HCA, which is reimbursed by Medicare $3,000 for each diagnostic catheterization and about $10,000 for the insertion of a cardiac stent. Thus, any evidence or allegations related to unnecessary procedures translates to more revenue for the hospital involved.

This is not the first time HCA has been accused of Medicare fraud. A case pursued by the Justice Department dating back to 2000 resulted in the eventual payment of $1.7 billion in fines and repayments on the part of HCA.

HCA denied its decisions at its hospitals were motivated by financial considerations, but rather "demonstrate the strong focus we have on quality patient care."

It should be noted that HCA ethics officers investigate all complaints and allegations of unnecessary procedures. However, a review of various communications inherent with those investigations reflect a greater importance on how a physician's activities may have affected the hospital's bottom line, than the welfare of the patient.

It has been shown that some patients have been harmed while undergoing procedures. While various procedures such as stent insertion carry a certain risk, such risk is unnecessary if the performed procedure is deemed unnecessary to begin with.

The Times reviewed a confidential 2004 memo authored by an outside organization that examined the medical records of one HCA hospital. CardioQual Associates concluded that upwards of 43 percent of angioplasty cases at Regional Medical Center Bayonet Point in Hudson, Florida were outside reasonable and expected medical practice. Some physicians had identified blockages as high as 80, or 90 percent in patients that were later found, upon scientific analysis of a sampling of cases, to have actual blockages ranging from 33 to 53 percent.

More Medical Malpractice News
Some patients have been harmed while undergoing allegedly unnecessary procedures. One patient was reported to have arrived at the emergency room of Bayonet Point complaining of chest pain. During a procedure, the man suffered a punctured blood vessel and a near-fatal irregular heartbeat. He had to be revived with paddles. An outside expert later suggested the procedure performed might have been unnecessary.

Another patient at Bayonet Point—an HCA hospital—suffered a cut blood vessel during a procedure to insert a stent. The patient went into cardiac arrest and had to remain in hospital for several days. An outside expert later described following an investigation the patient had no significant heart disease.

Tomlinson said such procedures on patients who do not warrant them, put the lives of patients unnecessarily at risk. "It bothered me," Tomlinson, a registered nurse, said in an interview with the Times. "I care about my patients."

It is not known if Tomlinson filed a whistleblower lawsuit against HCA, or if any of the injured patients have sought compensation or damages.

Posted by
Deborah Vostello
on February 10, 2015
I believe I had an unnecessary at the least the wrong catherization. As well, as I signed the forms and was informed of the procedure alone after being given a new med by the neurologist. It will be later realized that I was having a negative reaction. I have since been informed that given the issues the wrong side of the heart was examined. The new doctor has not wanted to redo the risky procedure to get the needed information.
Posted by
WS
on October 27, 2013
What about all the unnecessary hysterectomies and oophorectomies that take place in hospitals all across the country? 76% of hysterectomies do not meet ACOG criteria - http://www.ncbi.nlm.nih.gov/pubmed/10674580. 73% of women lose healthy ovary(ies), the equivalent of a man's testicles, at the time of hysterectomy. The loss of the uterus and/or ovaries has medically documented permanent adverse effects. Just as a man's sex organs have LIFE-LONG functions, so do a woman's.

1 in 3 women has a hysterectomy by age 60 and 1 in 2 by age 72. We need a class action lawsuit for all the women who've been harmed by having their organ(s) needlessly removed.