A Milwaukee County circuit judge has ruled that the state’s onerous tort reform statute does not apply in the case of a $25.3 million recovery for a woman who lost her arms and legs due to medical malpractice. 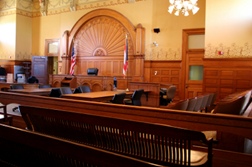 Ascaris Mayo of Milwaukee was admitted to Columbia St. Mary’s Hospital on May 24, 2011, with acute abdominal pain accompanied by a fever. The doctors who treated Mayo recognized signs of infection and included it in her diagnosis, but did not relay this information to her. She was sent home without being told about the option of antibiotic treatment to stop the possible infection and was referred to her personal gynecologist.

When Mayo’s illness worsened the following day, she visited a different emergency room, where she was properly diagnosed with a septic infection caused by Strep A. It was then that Mayo and her husband found out that the infection had spread and she needed to have all four of her limbs amputated to survive.

Her mobility will ultimately depend on her ability to adapt to prosthetic limbs.

The trial resulted in a jury verdict of $25.3 million, and the court confirmed this amount, despite Wisconsin’s statutory damage cap of only $750,000.

Wis. Stats. §§ 655.017 and 893.55(4), which limit the amount of noneconomic damages a medical malpractice plaintiff can recover, are tort reform legislation exemplified. The Wisconsin legislature enacted the laws with the aim of curtailing noneconomic damage awards.

According to § 893.55(1d)(a), Wisconsin’s goal in implementing the cap was to “ensure affordable and accessible health care for all of the citizens of Wisconsin while providing adequate compensation to victims of medical malpractice.” The Wisconsin legislature thought of everything - except for plaintiffs like Ascaris Mayo.

More MEDICAL MALPRACTICE News
Of the jury award, approximately $16.5 million consisted of noneconomic damages. The court gave the Wisconsin tort reform statutes a presumption of overall constitutionality, but found that the cap violated the Mayos’ right to due process and equal protection.

The court reasoned that they fell within the class of medical malpractice victims who are most affected by the cap, and that applying the cap to these specific plaintiffs was not rationally related to the legislature’s goal of reducing health care costs in implementing the cap.

“Who among us would give up all four of his or her limbs in exchange for $15 million?” the court asked, adding that “no one would trade these enjoyments for financial gain.” The case, Ascaris Mayo v. The Wisconsin Injured Patients and Families Compensation Fund, was decided on October 3, 2014.

Posted by
Christopher Everspark
on October 27, 2014
It is unimaginable to have all of ones limbs lost because of medical malpractice. Your life is completely and irreversibly changed.