Two premises liability lawsuits have recently been in the news and both are very similar to cases settled by Los Angeles premises liability attorneys. In a dog bite case, one traumatized couple saw their 5-pound Pomeranian mauled to death by a 150-pound Mastiff; the second case involves a "slip and fall" suit filed against Walmart. 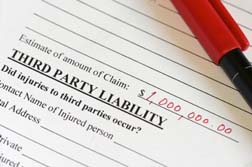 Dog Bite Lawsuit
According to premises liability California (and most other states), a homeowner is basically responsible for the safe condition of the home, including pets that are allowed to freely roam the premises. More often than not, dog bite lawsuits involve a dog biting a human, but increasingly animals are regarded not as property but as a member of the family, and some dog v. dog suits are duked out in court.

The Mengarellis's, the Pomeranian's owner/guardians, filed suit against Angela Marquardt, the woman who owned the English Mastiff, as well as the animal hospital they claim was negligent in causing the death to happen. They are seeking more than $50,000 from Marquardt and the animal hospital where the mauling occurred (it was the hospital's annual Holiday Open House).

More LOS ANGELESE PREMISES LIABILITY News
According to the lawsuit, one Pomeranian was leashed and the other was held by Michael Mengarellis. The Mastiff lunged at Dolce, who was leashed, and ripped the leash from Heather Mengarellis's hands, as they watched in horror…A veterinary technician and veterinarian took Dolce to an operating room and attempted to save the dog's life. The Mengarellis's are claiming premises liability, negligence and negligent infliction of emotional distress against both the hospital and the dog owner. In the lawsuit, they say that Marquardt did nothing to help stop the situation and the hospital failed to "properly supervise the event, or limit the number of people and animals."

Slip and Fall Lawsuit
Gregorio Valdez filed a slip and fall lawsuit against Walmart, claiming the store caused him to slip and fall on a puddle of water that was carelessly left on the floor. Apparently a Walmart employee knew the spill was there, but didn't get a chance to clean up. Valdez claims he was seriously injured due to the fall and is seeking actual and special damages, as well as court costs.