Celebrities are not immune to dog bite laws, as a recent dog bite settlement in Los Angeles can attest. And it might be a good idea for celeb handlers and dog owners—particularly breeds you can't stuff into your purse—to brush up on laws regarding Premises Liability LA . 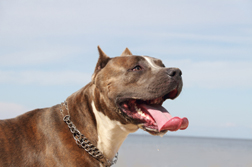 According to court documents filed in January 2011, R&B singer Christina Milian agreed to pay her neighbor $55,000 in a settlement from a dog bite incident that happened in 2008. The suit claimed the family's negligence led to the attack that left Leo Skolian, Milian's 81-year-old neighbor, with "severe personal injuries."

Skolian claimed Milian's pit bull got loose and tore a chunk out of his arm, which required 19 stitches and nine months of rehabilitation "to get back to normal." Skolian further claims that he still needs psychiatric help for fear and depression.

Under premises liability law, specifically the California Civil Code section 3342, the dog owner is liable for damages suffered by any person that is bitten while lawfully in a private place or while in a public place; it doesn't matter whether the owner is aware that the dog is vicious or not. And there is also a leash law in Los Angeles and a number of other California cities requiring a six-foot limit or under (see section 3342 below).

Misty, who lives in West LA, said that her landlady owns two houses on one lot and refused to put up a fence between the two homes. "We have two dogs and our neighbors have two pit bulls running around freely," said Misty. "I went out to my garage, which was detached from the house, said, 'Hello' to the neighbor then turned to walk back into my house. When I got to my back patio, one pit bull came behind me and hooked onto my right calf. I have photos and they are really gross…"

Misty may be able to sue the dog owner and her landlady. And it's a good thing she has photos; a dog bite attorney also advises that anyone who has suffered a dog attack—a personal injury—should keep a journal; the more evidence the better. As well, photos and documentation can help you remember what happened: As in Milian's case, it took two years to settle a dog bite lawsuit.

Liability Under California Civil Code ÃŸ3342.
(a) The owner of any dog is liable for the damages suffered by any person who is bitten by the dog while in a public place or lawfully in a private place, including the property of the owner of the dog, regardless of the former viciousness of the dog or the owner's knowledge of such viciousness. A person is lawfully upon the private property of such owner within the meaning of this section when he is on such property in the performance of any duty imposed upon him by the laws of this state or by the laws or postal regulations of the United States, or when he is on such property upon the invitation, express or implied, of the owner.
(b) Nothing in this section shall authorize the bringing of an action pursuant to subdivision (a) against any governmental agency using a dog in military or police work if the bite or bites occurred while the dog was defending itself from an annoying, harassing, or provoking act, or assisting an employee of the agency in any of the following:
1. In the apprehension or holding of a suspect where the employee has a reasonable suspicion of the suspect's involvement in criminal activity. 2. In the investigation of a crime or possible crime. 3. In the execution of a warrant. 4. In the defense of a peace officer or another person.
(c) Subdivision (b) shall not apply in any case where the victim of the bite or bites was not a party to, nor a participant in, nor suspected to be a party to or a participant in, the act or acts that prompted the use of the dog in the military or police work.
(d) Subdivision (b) shall apply only where a governmental agency using a dog in military or police work has adopted a written policy on the necessary and appropriate use of a dog for the police or military work enumerated in subdivision (b). [1953 ch. 37, 1988 ch. 298.] California Civil Code ÃŸ3342.5. Owner's Duty to Remove Danger Present to Others by Dog
(a) The owner of any dog that has bitten a human being shall have the duty to take such reasonable steps as are necessary to remove any danger presented to other persons from bites by the animal.