"Our life was Hell because of Levaquin"

"My husband just walked to his truck and heard two big 'pops'," says Lifka."He blew out the quads in both legs and went down." Chuck had been taking the antibiotic Levaquin for a respiratory infection; nobody told him about Levaquin side effects. "By the time I found him, Chuck had almost frozen to death—it was February in Wisconsin."

Chuck was in excellent shape: he builds houses and coaches football. Lifka says he wasn't working or involved in any athletic events at the time this happened. Instead, Chuck was getting over the bacterial infection—the reason he was prescribed Levaquin medicine, which he had taken for 8 days. Because of his coaching experience, Chuck knew what had happened right away. 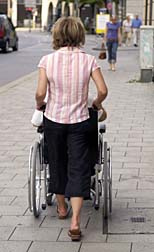 "I saw his truck in the driveway but I couldn't find him," says Lifka, "then I went outside and looked over my deck and saw him laying there in the snow. Through his jeans I could see the bulges of muscle on both sides of his legs; they had completely separated from his knee cap. By the time the ambulance came, his water bottle was frozen.

"Our local hospital wasn't qualified to do anything so Chuck was transferred to a hospital in Madison, about 40 miles away, where he was able to see a specialist. A few doctors looked at him, ran some tests and x-rays were taken. Both quads were completely ruptured. The prognosis: he was a case study. The specialist had an opening the following week and surgery was scheduled.

Meanwhile Chuck came home with me in a wheelchair and he had locked braces that went from his groin to ankle so no movement was possible. And he had lots of pain killers, including Oxycontin—that is a whole other story. Chuck is 6' 4" and 230 lbs so we couldn't even get him and the wheelchair into the house. Our life was hell and it still is…

The surgery was beyond horrible. They had to saw into his kneecap, take that muscle and wrap it into the opening, bring it through the knee and re-attach muscle to muscle by looping it through his kneecap. And they drilled holes in the sides of his kneecaps so no pressure would be put on those muscles until rehab kicked in. Chuck was in hospital a few days, followed by intense rehab until this past July—he had to learn how to walk all over again.

Chuck wasn't doing anything physical when this happened. What could have caused these ruptures? Our specialist said it was bizarre, that none of it made sense. Then we mentioned Levaquin to him and he was very cautious in his reply; in fact he avoided the topic. Then I looked on the Internet…

Chuck is only 46 but when this happened, he lost all his muscles, his face was gray and he looked decades older. He is working hard at recovery but will never be normal.

'My future is done,' Chuck said to me just the other day. 'I'm going to be more handicapped the older I get.' Chuck is in pain all the time. He certainly can't go back to working at the level he did and house building was our livelihood. Now we just take it day by day, that's all you can do. And now he suffers with depression; he can't sleep because of the pain and our lives are full of anxiety. Our kids can't understand the pain he suffered or the drugs he was on--that was horrific. It was so painful for us to see him suffer so much.

More LEVAQUIN News
I am absolutely furious that this happened. We should be informed about any drug on the market and have a choice: when you are uninformed by the health community and something like this happens, you are so helpless.

People need to know about this whole group of drugs; the medical field must let us know. And it is happening to so many people, it has to stop. We are from a little town and appreciate our doctor and pharmacist; I don't even think they were informed so it has to start with the drug company: they are responsible. We didn't even know about a black box warning until I researched Levaquin lawsuits on the Internet.

I just hope we can help others to become aware of this drug. And get some legal help: we had so many dreams and plans; what did Chuck do to deserve this? All because nothing was told to us about Levaquin's side effects."

Posted by
Kathie
on December 12, 2010
To Mineral Point WI: I too am in constant pain with rt quad/groin tendonitis since June 2010. What can be done?