John Fratti has been working on Levaquin advocacy and awareness for the last few years. "After taking Levaquin, I have suffered from Levaquin-induced central nervous system damage,and damage to my nerves and tendons," says Fratti. 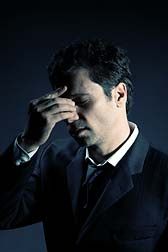 Ironically, Fratti worked as a pharmaceuticals sales rep for more than 8 years, until he was given the antibiotic in 2005. He hasn't been able to work for more than three years--adverse side effects began one month after he first took Levaquin.

"I had equilibrium problems and brain fog, dizziness and vision problems," says Fratti, "followed by neuropathy and tendon damage. I then had a constellation of other delayed Levaquin symptoms that left me unable to work."

Fratti got progressively worse but no one could point the finger at Levaquin. Finally he had more tests that indicated his symptoms were consistent with Levaquin damage and soon after that, the drug was slapped with a black box warning.

More LEVAQUIN News
"After the Levaquin warning I got other doctors to diagnose me with Levaquin side effects based on these tests," says Fratti. "Before that happened, I started to believe Levaquin wasn't the cause. But I have a video that shows me playing basketball just before I took Levaquin—it was aired on ABC News in May, 2009. It is the story about Levaquin and how its black box warning came too late for me. There is a warning in the Levaquin package insert in small print—doctors don't even read it and patients don't get this package insert when they go to the pharmacy. They just get the prescribing literature."

Fratti says he doesn't have a prognosis and is currently taking lots of pain meds, but he is hopeful that the symptoms will subside to a "tolerable" level. In the meantime, he is doing a lot of advocacy work against drugs such as Levaquin, including Cipro and Avelox.

"There should be a patient guide that explains Levaquin's risk-to-benefits ratio because the package insert mentions that Levaquin can cause irreversible damage," says Fratti. " As I said, people do not get this insert but they have the right to this information; they should have the right to informed consent."