"Levaquin Should Not Be Prescribed to Patients over 60"

Al Parke was 64 years old when he was prescribed Levaquin to treat a serious bacterial infection. The infection cleared up, but he began to develop other problems, such as joint pain, that prompted him to research Levaquin side effects online. "Unfortunately I read after the fact that Levaquin should not be given to people over the age of 60," he says. 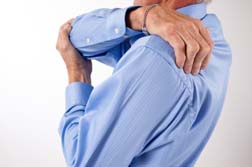 "After the third day on Levaquin I had trouble thinking; I felt lightheaded, and my joints were aching," says Al. "I wondered what was causing these symptoms—I couldn't sleep for more than two hours at a time. I had anxiety like I was having panic attacks. I was a prison warden for 25 years and never had anxiety before; I've dealt with hostage situations, stabbings and staff had been killed on my watch, but I never had anxiety, just stress. I was used to thinking in emergencies and I have a Masters degree in psychology but this Levaquin really affected me, both mentally and physically.

"On the fourth day I went online and read that I had most side effects listed. But I figured I needed to take the rest of the drug because this infection was serious. It took me three weeks to sleep normally again. It's like I was hyper all the time—like a cat on a hot tin roof. I couldn't relax or do anything.

"Then my joints kept hurting, especially my left shoulder, and they are still bothering me. I had torn cartilage in that shoulder a few years back but it didn't bother me too much, until now. I've been a weight-lifter all my life and in pretty good shape for my age group; I walked a few miles each day. Now my right shoulder, elbow and both hips ache so I'm not my usual self and I'm back with problems sleeping again.

"Now I think I may have tendon problems. I know that I have two tendon tears in my left shoulder because I had an MRI at the end of February of this year, just one month after taking Levaquin. I thought I would give it a few more weeks but I'm still having a lot of pain so now I'm scheduled for multiple MRIs.

More LEVAQUIN News
"I went back online and began to look up Levaquin lawsuits. I've never sued anyone in my life (although I've been sued a lot as a warden!) but I was curious about this drug. An attorney from LawyersandSettlements called and asked about my symptoms. And I am in the process of getting all my medical reports in order, both for my attorney and myself. He suggested I get more MRIs.

"My Achilles tendon aches too, so this is another cause for concern. At the moment this isn't debilitating but it is very irritating and I'm constantly in discomfort. I asked my doctor why he gave me this medication at my age, but he didn't know not to! Why wouldn't the drug manufacturer tell the medical community not to prescribe their drug to anyone in this age group?"

In October 2008, the FDA issued an alert that stated: "Fluoroquinolones, including Levaquin, are associated with an increased risk of tendonitis and tendon rupture in all ages. This risk is further increased in older patients usually over 60 years of age…." See further warnings here.

Posted by
Harriet Anthony
on August 12, 2011
I've exprienced the same symptons,only to end up having 2 surgeries(horrible procedure)the first surgery,I cried all the way home,I went in as an outpatient with a pain-pump attached to my shoulder,after wearing it for 5days,it was recalled! My second surgery was Jan.2011,this doctor kept me for 2days in the hospital after I told him what happened before,he gave me morphine,I was fine until it wore off,all hell broke out and I was put back on vicodin,4pills every 4hrs for several months,I'm still in pain as I type,My doctor has moved back to Florida,now I have to find another doctor,I've seen so many doctors,it's rediculous!My whole body just "ACHES"everyday! Soc.Security has denied my claim for the fourth time saying,I don't have enough evidence,nobody is gonna hire me with all the ailments I have. I'll be 60yrs old in October,I have enough credits & funds,When will I prevail? Tired of "HURTING!" "HELP ME"