In Part 1 of this article, I discussed the Food and Drug Administration's recall of a variety of Bard Composix Kugel Mesh patches, the patches especially designed for hernia repair surgery.

I also described what happened when the "spring-loaded" memory recoil ring in the defective Kugel Mesh patches pops open: The sharp ends of the ring can migrate through the abdomen, variously causing abdominal pain, perforated bowels, fistulas (abnormal connections or passageways between the intestines and other organs) or other problems. 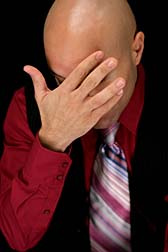 The broken rings have caused widespread injury and may have caused or contributed to at least one death. Many of the people injured by defective Kugel Mesh patches have now sued the manufacturer.

It is possible that people who have had a Kugel Mesh hernia repair some time ago may still face suffering—if and when the memory recoil ring breaks.

If you have had a hernia repair operation, you could contact your surgeon to find out whether the repair involved a Kugel Mesh patch, and if that patch was from one of the recalled product lists.

More News
The symptoms that could alert a post-surgery patient to a broken Kugel Mesh memory recoil ring include the following: unexplained or persistent abdominal pain, tenderness at the implant site, fever, or other unusual symptoms.

Most hernia surgeries are conducted on male patients. For every woman with a hernia, says the Midwest Hernia Center, there are 12 men who suffer from the condition.

Men are notoriously resistant to going to the doctor. But if a man has had hernia surgery, even years ago, and is experiencing any of the symptoms described above, he should make that call to the doctor.

The warning extends to any person--man, woman or child--who has had hernia surgery, and who is experiencing any of these symptoms: take steps immediately to rule out a defective Kugel Mesh patch as the cause of the symptoms.

It could be a matter of life or death.