A Near-Miss with Ketek

Chad was given a sample of Ketek from his doctor for a sinus infection; within half an hour of taking the first dose he got a high fever and "the worst headache of my life," says Chad. "Intuitively I knew it was a bad reaction to the drug." 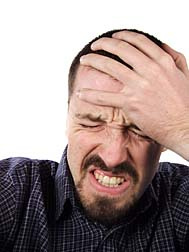 Chad's intuition most likely served him well. Right away he called his doctor's office but they didn't return his call. Then he 'googled' Ketek and found out that two deaths were directly linked to this over-prescribed antibiotic.

"The red flag was raised when I read that," says Chad. "Do I need to get to the hospital, am I going to get worse? I called my doctor again but no call back. The next morning, I took all the Ketek samples into my doctor's office and asked to be prescribed a different antibiotic, one that didn't have death as a possible outcome.

For the next six months, I did some more online research about Ketek. I was concerned that I might have a chronic problem, even from the one dose I took. There was a lot of information about the adverse events caused by Ketek. I went back to my doctor's office with some of these reports but they dismissed them, saying 'You got this information from the Internet," inferring that these reports were bogus--even though one report was from the New York Times. I thought this was irresponsible on their part.

I was trying to prevent my doctor from prescribing this drug to someone else. It should have been evident that there was more to this drug than the FDA and the drug company wanted us to know.

Last June, Senator Grassley of Iowa [caught wind of the problems] associated with Ketek. Apparently, he tried to get more information from the FDA but the agency wasn't forthcoming. But I suspect his efforts may have brought more attention to Ketek's problems, thankfully. I am amazed this drug is still on the market. I know that it can only be prescribed to patients with pneumonia, but can't they be vulnerable to Ketek's deadly side effects as well? Can't they also develop liver damage?

And I also read about the [MD who falsified reports] of Ketek - I would think the FDA would immediately pull this drug with this knowledge. And I also read that high officials had input on drug testing and approvals, officials who own shares in the companies they are approving - I have to wonder if Ketek is one of those companies. People have had kidney and liver transplants because of this drug—how it ever got approved is beyond me.

If I had only experienced half the reaction from that one dose, I might have kept taking Ketek and suffered some serious damage. I'd like to see Ketek completely pulled from the market. To me, the relationship with the drug companies and the FDA is too comfortable. "

More News
One lawsuit filed this year alleges that Sanofi-Aventis knew about Ketek's link to liver failure: the drug was sold in Europe in January 2006 with warnings about liver failure but it took another year to include warnings on US packaging. One doctor said ""This was not a drug that anybody thought was necessary in terms of public health but it was important for the company financially."

It wasn't until March 2007 when Sanofi-Aventis issued a 'Dear Doctor' letter with new warnings and labels for Ketek.
On July 18, 2007 the New York Times reported that a federal drug safety official concluded that Ketek should be withdrawn. Dr. David Graham, an official at the FDA's drug safety office, wrote that the approval by the FDA was a "mistake" and "It's as if every principle governing the review and approval of new drugs was abandoned or suspended where telithromycin is concerned."