When a federal court ruled that the Army Corp of Engineers, which built the canal linking New Orleans to the Gulf of Mexico, was to blame for the catastrophic flooding that followed Hurricane Katrina, it was a personal and professional victory for attorney Joesph Bruno. "The people of New Orleans are vindicated," said Bruno before a throng of media representatives. "They (the Army Corps of Engineers) can no longer hide behind an immunity. It is time for the people of this city to be compensated." 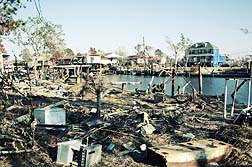 In writing his decision, the judge found that the Army Corps of Engineer demonstrated negligence and a carefree indifference that led the levies to overflow and swamp 90 percent of the city in floodwater.

"My home was spared," he says. "But all around me it was like—" He pauses for a long moment. "It was like Beirut! You couldn't go anywhere. There wasn't a soul around. The worst time was at night. I was in my house watching television while people were drowning. I made me sick to my stomach."

In the weeks and months that followed, the residents of New Orleans were repeatedly told they what had happened would happen again, and that they were crazy for living in a flood plane.

Together with a consortium of 20 other lawyers, Bruno began analyzing the situation. They traveled to Amsterdam for the best available information on wave patterns and built computer models to review possible outcomes. They spent $8 million of their own money and five years of their time preparing a case of negligence against the Army Corps of Engineers on behalf of six plaintiffs. "It is what you do," says Bruno. "You can't advocate your client's position unless you get into the nuts and bolts to what is alleged to have gone wrong. This has been a remarkable case, because we had to figure out what went wrong."

The judge found that the Army Corps of Engineers had had a number of opportunities to fix the levies but failed to do so. Five of the six plaintiffs are to be compensated in amounts ranging from $100,000 to $317,000.

Bruno anticipates an appeal in the case. He also has class action pending that could see compensation for others in New Orleans.


"Yes, it would be one of the largest suits ever, but we need to settle this case. We are not looking for a windfall we are just looking to fill the gap," says Bruno.

Joseph M. Bruno graduated from Tulane University in 1977 and in 1978 received his Juris Doctor from Tulane School of Law. In 2007, Joseph Bruno formed his own firm, the Law Office of Joseph M. Bruno. With over twenty years' experience, Bruno is recognized as an authority in class actions, particularly in the management of class actions. His expertise in difficult and complex litigation has led to his representation of numerous claimants in class action and mass joinder proceedings involving racial discrimination, occupational lung disease, product liability, and wage and hour violations.