The victims of one of the worst natural disasters in US history were given a little solace this week after a federal judge ruled that the US Army Corps of Engineers had failed the residents of New Orleans by doing nothing to prevent the devastation that followed in the wake of Hurricane Katrina. 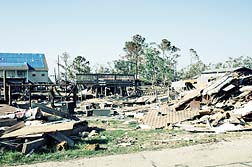 In a landmark ruling on November 18, US District Court Judge Stanwood Duval found that the Army Corps failed in its oversight role involving the Mississippi River-Gulf Outlet (MRGO).

"The failure of the Corps to recognize the destruction that the MRGO had caused and the potential hazard that it created is clearly negligent on the part of the Corps," Duval said in his ruling.

"Furthermore, the Corps not only knew, but admitted by 1988, that the MRGO threatened human life and yet it did not act in time to prevent the catastrophic disaster that ensued with the onslaught of Hurricane Katrina."

The historic ruling serves as vindication for residents of New Orleans' Lower Ninth Ward and the neighboring St. Bernard Parish, and it could also serve as a precedent for future litigation and much larger payouts.

A handful of plaintiffs were awarded a total of $720,000—about $170,000 each. However, this number pales in comparison to the billions of dollars that could potentially be distributed to as many as 100,000 other residents, businesses and government entities affected by the Category 5 hurricane.

In his ruling, Judge Duval stressed that he held the Army Corps of Engineers accountable for the failure of the MRGO and the devastation inherent with the Lower Ninth Ward and St. Bernard Parish, but not for the flooding of eastern New Orleans.

"It's just about holding the Corps accountable for what they did," a tearful plaintiff told the Associated Press after the ruling was announced. "They knew there were problems. I think the Corps of Engineers failed us.

"There's things we all lost. I lost things that are unreplaceable," she said. "It was a long and hard road."

If you have suffered losses in this case, please send your complaint to a lawyer who will review your possible [NATURAL DISASTERS Lawsuit] at no cost or obligation.
Request Legal Help Now