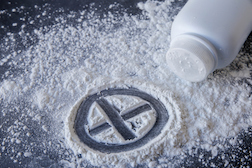 Justices ruled 8-1 on June 19, 2017 that hundreds of out-of-state residents aren't allowed to sue Bristol-Myers Squibb Company in California state court over negative reactions to the blood thinner Plavix. According to the St. Louis Post-Dispatch, the ruling followed a similar ruling in May involving out-of-state injury claims against BNSF Railway Company.

"Both were seen as wins for companies opposed to 'venue shopping,' in which those filing suit seek out favorable state courts," the Post-Dispatch reported.

Similar complaints are pending in New Jersey, Delaware and California, and more federal talcum powder lawsuits were consolidated in an October 2016 in a multidistrict litigation in New Jersey, MDL 2738.

More TALCUM POWDER News
More than 1,000 similar lawsuits have been filed in St. Louis against Johnson & Johnson, with most of the plaintiffs living outside Missouri, according to the St. Louis Post-Dispatch. In five talcum powder cancer trials against J & J that took place over the past 16 months, jurors awarded more than $300 million combined, the Post-Dispatch reported.

The June high-court ruling could mean that the four St. Louis multi-million-dollar verdict awards may eventually be re-tried.

Johnson & Johnson spokeswoman Carol Goodrich told the St. Louis Post-Dispatch in an e-mail that J & J believes that the Supreme Court ruling "requires reversal of the talc cases that are currently under appeal in St. Louis."