Yet another body powder lawsuit has been launched by a plaintiff who claims she used Johnson & Johnson (J&J) talcum powder daily since 1950, without realizing she could be putting herself at risk for ovarian cancer. Mona Estrada notes in her legal action that the only proviso on the part of the manufacturer was that the talcum powder be used only externally (and never around the eyes). The inference was also that talcum powder was safe to use daily and indeed, according to the plaintiff, Johnson & Johnson encouraged daily use. 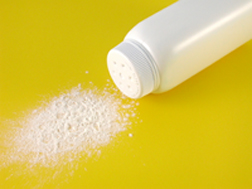 The putative class action was filed April 29 in California Federal Court. Estrada holds that Johnson & Johnson knew through various studies that Johnson’s Baby Powder, a heritage product and a brand as close to mom and apple pie as one could imagine, carries a 33 percent risk for ovarian cancer when used in association with female genitalia. Talcum powder has been a favored product for personal hygiene amongst women for generations.

Estrada, who has been using the product faithfully for more than 60 years, notes that the label has changed over time, but the contents never alluded to anything as sinister as body powder and cancer. Provided it was used only externally, there was never any concern.


However, Estrada’s body powder lawsuit claims that J&J has known about the potential for ovarian cancer for more than 30 years, but withheld the information from consumers.
The complaint cites a 1982 study that found a link between talcum powder used for hygiene on female genitals and ovarian cancer. What’s more, according to the complaint, the author of the 1982 study indicated to a doctor employed by J&J that the manufacturer would be wise to add a warning label with regard to the possibility of ovarian cancer when talcum powder was used in such fashion.

The talcum powder lawsuit also claims that the American Cancer Society referenced a 2008 study that linked body powder and cancer, and that the powder “probably” increased the risk for ovarian cancer, according to the complaint.

The Johnson & Johnson lawsuit accuses the manufacturer of misrepresentation and breach of implied warranty, as well as violations of the California Consumer Legal Remedies Act and Unfair Competition Law.

More TALCUM POWDER CANCER News
“As a result of the defendants’ misrepresentations and omissions,” the complaint said, “plaintiff and the proposed class have purchased a product which is potentially lethal,” the lawsuit says. “Although the label has changed over time, the message is the same: that the product is safe for use on women as well as babies.”

The lawsuit cites an earlier lawsuit, filed by plaintiff Deane Berg, in which the jury found Johnson & Johnson was liable for negligence, but not failure to warn. The plaintiff in that case, believed to be the first asbestos-free talcum powder lawsuit brought, was not awarded any punitive or compensatory damages.

As for Estrada, while she is not claiming any personal injury in her lawsuit, she nonetheless claims that she would not have purchased the product and would not have used it had she known about the link between body powder and cancer.

The case is Mona Estrada v. Johnson & Johnson et al., Case No. 2:14-cv-01051, in the US District Court for the Eastern District of California.

If you or a loved one have suffered losses in this case, please click the link below and your complaint will be sent to a defective products lawyer who may evaluate your TALCUM POWDER CANCER claim at no cost or obligation.
Request Legal Help Now