In the ongoing talcum powder cancer litigation the courts have come to some contradictory conclusions about allegations linking talcum powder and cancer. While two lawsuits resulted in large awards to the plaintiffs, two recent lawsuits were thrown out of court with a judge ruling the plaintiffs did not prove the use of talc caused their ovarian cancer. 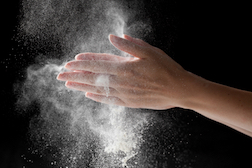 According to Bloomberg (9/2/16), Judge Nelson Johnson ruled Brandi Carl and Diana Balderrama did not provide sufficient evidence that their ovarian cancer was linked to their use of talcum powder. Johnson & Johnson currently faces at least 1,000 lawsuits filed in state and federal court, filed by people who alleged the company knew about the risks of using talcum powder but failed to warn consumers about those risks.

Many women used talcum powder in their underwear or sanitary pads to control sweat and odor. Some critics, however, argue that the feeling of freshness may not be worth the risk of ovarian cancer. That includes researchers who recently concluded the use of body powder was "significantly associated with [epithelial ovarian cancer] risk."

The judge's ruling in the Carl and Balderrama cases contradicts two earlier rulings awarding millions of dollars to women who alleged they developed ovarian cancer after long-term perineal use of talcum powders. In February 2016, Johnson & Johnson was ordered to pay $75 million to the family of Jacqueline Fox, who died of ovarian cancer at age 52. The $75 million award included $10 million in compensatory damages and $62 million in punitive damages. Johnson & Johnson has said it will appeal the decision.

Meanwhile in May 2016, a jury awarded $55 million to Gloria Ristesund - including $5 million in compensatory damages and $50 million in punitive damages. Johnson & Johnson will likely appeal this decision as well.

More TALCUM POWDER News
Attorneys for Brandi Carl and Diana Balderrama have indicated they are likely to appeal the judge's ruling, given the previous rulings in favor of plaintiffs. Furthermore, the International Agency for Research on Cancer has classed talc-based powder as "possibly carcinogenic to humans." Those who argue Johnson & Johnson knew about the risks of ovarian cancer say studies as far back as 1971 suggested a link between talcum powder and ovarian cancer. But even those studies have come to contradictory results.

As both sides appeal the decisions against them and as more lawsuits are filed, it will remain up to the courts - and whatever scientific evidence can be found - to determine whether Johnson & Johnson is liable for women developing ovarian cancer.