$110 Million Talc Verdict Comes Down in Favor of Plaintiff

A jury in St. Louis, Missouri has ordered Johnson & Johnson to pay Lois Slemp, a 62-year-old woman with ovarian cancer from Wise, Virginia, $110 million in what is the largest verdict to date in the ongoing battle between J&J and thousands of women that have filed lawsuits claiming that J&J knew its talc based products elevated their risk of reproductive cancers. 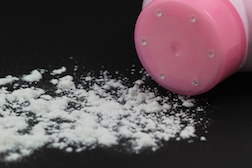 The Slemp verdict is the fourth of five verdicts decided in favor of plaintiffs now totaling $307 million. J & J has won one case and succeeded in having two others from coming to trial due to lack of evidence.

During the 17-day-trial broadcast on Courtroom Connect over the internet Slemp told the jury, via an audio recording, that she had been using J & J Baby Powder and J & J Shower to Shower for decades because she liked the smell and it felt good. Slemp, who is currently undergoing chemotherapy for ovarian cancer, also said had she known that these products came with the risk of genital cancer she would never had used them.

The plaintiffs’ cases have all relied heavily on the testimony of Dr. Daniel Cramer, an epidemiologist and Brigham Young Hospital gynecologist who has studied the link between talc and genital cancers for over 30 years and published numerous peer reviewed articles on the topic.

It was Dr. Cramer’s published research in 1982 that first linked talc, a mineral contained in Johnson & Johnson’s Baby Powder product, to ovarian cancer. In fact, Dr. Cramer actually met with J&J in 1982 to discuss his research directly with the company at its request.

The litigation the company now faces says Slemp’s lawyer, Ted Meadows, is of J & J’s “own making”. “Johnson & Johnson could have listened to Dr. Cramer in 1982. It could have warned people but they have been ignoring the issue for almost 40 years,” says Meadows from the Beasley Allen Law Firm which represents many of the women that have filed suits in federal and state courts.

During the Slemp trial Dr. Cramer told the court that Lois Slemp’s major risk factor for developing ovarian cancer was the fact that she used talc based products almost every day for 40 years. The fact that talc was found in her ovaries said Dr. Cramer “speaks for itself”.

Dr. Cramer told the trial he had looked at the Lois Slemp’s ovarian cancer risk factors and it was his “opinion to a reasonable degree of medical and scientific certainty that Ms. Slemp’s genital use of talc was the major contributing cause and substantial cause in the development of her serious borderline tumor.”

J&J maintains its talc based products are safe. During all five trials J&J has presented scientific analysis it believes shows flaws in Dr. Cramer’s research.

“When they come after Dr. Daniel Cramer, well, there is a raw nerve there. He has been speaking out against talc since back in the early 80s,” says Meadows.

J&J is currently appealing the three previous verdicts that found for the plaintiffs and is expected to file an appeal in the Slemp verdict.

More TALCUM POWDER News
J&J spokesperson Carol Goodrich said in a statement posted on the company’s website, "We deeply sympathize with the women and families impacted by ovarian cancer. We will begin the appeals process following today’s verdict and believe a jury decision in our favor in St. Louis in March and the dismissal of two cases in New Jersey in September 2016 by a state court judge who ruled that plaintiffs’ scientific experts could not adequately support their theories that talcum powder causes ovarian cancer, further highlight the lack of credible scientific evidence behind plaintiffs’ allegations.”

No health and safety regulators anywhere in the world have asked Johnson & Johnson to make changes to the labels on its Baby Powder and Shower to Shower products.

In June 2017, J & J faces a multiple trial situation in St. Louis involving potentially five more women with genital cancers who are litigating J & J for alleged negligence and the alleged connection between ovarian cancer and the use of talc based products.

Beasley Allen will be representing the women.

There is also a trial coming up in California.