On October 23, 2017, Hill v. Cook Medical, Inc., et al, 1:14-cv-6016 will go to trial in the US District Court for the Southern District of Indiana. This will be the first of three IVC filter lawsuits to be heard in the brewing multidistrict litigation (MDL) against Cook Medical, Inc. That MDL now includes approximately 1,900 individual lawsuits. Although the outcome of the Hill bellwether lawsuit will not be binding in the other cases, IVC filter patients and their attorneys are paying close attention. The outcome will affect the settlement value of similar cases. 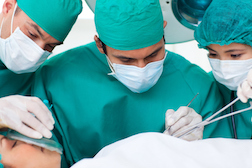 The complaint alleges that Elizabeth Jane Hill was seriously injured when her IVC filter perforated through her inferior vena cava and migrated into her duodenum. Repeated attempts to remove the filter failed, and she lived with severe gastrointestinal symptoms, including diarrhea, vomiting, abdominal pain and fatigue. When, three years later, her new doctors succeeded in removing it, they found that some of the damage was permanent -- narrowing of the inferior vena cava where it was first implanted and the area of her intestines, where it drifted. It scarred all along the way, wherever it went.

The lawsuit asserts that Cook Medical knew or had reason to know that the IVC filter, contrary to marketing claims, was difficult or impossible to remove. But it was also not designed for long-term use in patients once the immediate danger of a pulmonary embolism had passed. It was too hard to remove and too fragile to stay.

More IVC FILTER News
After the immediate danger from a blood clot was gone, patients with a Cook Celect IVC filter implant faced the risk of permanent damage to internal organs because the spidery legs of the tiny device broke, moved, and imbedded themselves into soft tissue. Patients who cannot have the filter or all the microscopic fragments removed must continue to take anticoagulant medications for life. These drugs raise an additional risk of hemorrhage and complicate the treatment of other medical conditions.

What happens next? The longer an IVC filter remains implanted, the higher the risk of complications. The FDA recommends removing temporary filters between 29 and 54 days after implantation. However, studies have found that 43 percent of Celect filters perforate the vena cava within two months, which is well within that period.

There is a surge of litigation. In addition to the 1,900 cases already included in the MDL, other lawsuits continue to emerge in and not all are yet included in the MDL. The outcome in Hill will determine much of what happens hereafter.